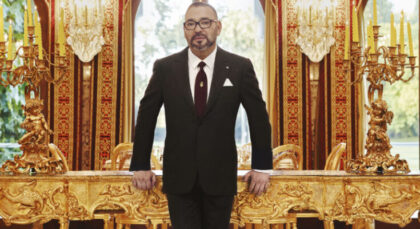 There are very few events in the History of a country that transcend time and generations to remain vivid in the memory of all, old and young. There are few events that enshrine historical grandeur and at the same time a sense of destiny and belonging. And Morocco did live such an event: the Green March.

That was an unprecedented march of 350,000 Moroccans who walked hundreds of Kilometers to peacefully recover a part of their country, the Western Sahara, which was under Spanish dominion.

No shots were fired, not a single drop of blood was shed, and no tears were shed from a bereaved mother or a widow and Morocco retrieved its spoliated Sahara. That was in 1975.

The centuries-old historical, geographical, and ethnical ties that existed between the Sahara and Northern Morocco and that were broken by colonialism for decades were stitched again after the Hague-based International Court of Justice delivered a ruling on October 16, 1975, affirming that the Sahara was never terra nullius (territory without master).

Forty-six years after the launch of the Green March, Moroccans still remember this glorious epic played by some 350,000 civilian volunteers from different social strata and from all regions of the kingdom who marched to liberate the Sahara from Spanish occupation with no weapons other than the Koran and the national flag. The marchers were unknowingly creating a legend. A myth was born.

This Saturday, the Moroccan people are celebrating the 46th anniversary of the Green March epic, at a context marked by valuable diplomatic gains at the UN, growing support for the Moroccan identity of the Sahara and for the Morocco-proposed autonomy plan to end the Sahara dispute, coupled with an unprecedented development impetus.

When Spain withdrew from the territory, it left behind a bare desert with just few tiny agglomerations. The green March was over but the enthusiasm it triggered did not fade away, an enthusiasm that prompted Morocco to invest billions of dollars to bring out from this desert area modern cities, equipped with state-of-the art infrastructure in economic, social, health, educational and sports sectors, and to allow the populations of the southern provinces to lead a dignified life.

The cost was high and the sacrifice was huge. Yet, each and every component of the country supported the investments injected in the Sahara to assist the long-neglected region and its population. As recalled by King Mohammed VI himself, since Morocco recovered the Sahara in 1975, “for every single dirham of revenue from the Sahara, the state invests 7 dirhams there, as part of the solidarity between the regions and between the sons and daughters of the nation.”

The sacrifices were worth it. Morocco pacified the territory and won the battle of economic development and integration as evidenced by the huge structural projects and urban achievements carried out in the Southern Provinces.

Today, the southern provinces, like other parts of the Kingdom, enjoy security and witness an unprecedented development dynamic triggered by the new economic development model for the Sahara, worth some $7.7 billion that was initiated by King Mohammed VI to boost the economy; consolidate social cohesion and promote culture; enhance social inclusion; ensure effective protection of the environment and sustainable territorial development; and define responsible, inclusive governance.

The bare desert left by the Spanish colonizer is now a thriving center endowed with state-of-the art infrastructure that are reshaping the landscape of this entire region, while other major projects are underway.

A genuine transcontinental road that will link Europe to sub-Saharan Africa through Morocco is under construction, with the 1,055 km-long expressway linking Tiznit to Dakhla. The project that required a $1.0 billion investment will be operational in 2022.

Another outstanding project provided for in the new development model for the southern provinces is embodied by the port of Dakhla. The project, requiring an investment of $1.0 billion, concerns the construction of a deep-water port on the Atlantic coast, 40 km north of Dakhla. The project features three components: a commercial port; a port dedicated to coastal and deep-sea fishing; and a port dedicated to shipbuilding industries.

The southern provinces are also involved in the green revolution Morocco has embarked on through the promotion of renewable energy. The Laâyoune and Boujdour solar power plants have already been operational since 2018, with a total capacity of 100 megawatts.

Other wind energy farms have been launched in Tarfaya, in Foum el Oued and in Akhfennir. And it’s not over. Other projects with a capacity of 800 megawatts are underway.

At the political level, the population of the Moroccan Sahara has always participated massively in all the elections organized in the country, and so it did lately, during the elections of September 8, 2021, confirming thus its attachment to the territorial unity of the Kingdom and its full commitment to the implementation of the new development model in the southern provinces.

Besides the population’s renewed political commitment, the Green March 46th anniversary is celebrated in a diplomatic context marked by the adoption of the UN Security Council resolution 2602, which consolidates the achievements made by the Kingdom in the Sahara issue, achievements made possible thanks to the personal, unwavering commitment of King Mohammed VI.

Resolution 2602, which extends for one year the MINURSO mandate till October 31, 2022, actually enshrines the preeminence of the Moroccan autonomy initiative to resolve the artificial Sahara conflict.

Moreover, over 26 countries from Africa, the Arab world, and the Caribbean have set up consulates in the cities of Laayoune and Dakhla to renew their support to Morocco’s territorial integrity.

Whatever the vicissitudes and sacrifices, the Green March was an admirable feat of diplomacy. It enabled to oust a colonial power without resorting to arms. It allowed a whole region to embrace economic and social development. It allowed to establish a new geopolitical balance of power in the region.