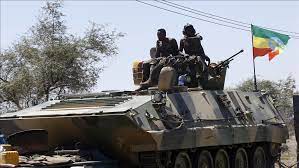 Ethiopian citizens, foreigners and diplomats are reportedly fleeing Addis Ababa as rebel forces close in on the country’s capital.

According to press reports, Tigray fighters and Oromo rebels have surrounded the capital.

Ethiopia had earlier Tuesday declared a state of emergency to protect, as reported by Fana Broadcasting, a state-owned media outlet, “civilians from atrocities being committed by the terrorist TPLF group in several parts of the country”.

The restrictions include a curfew, road closures and searches of “anyone suspected of collaborating with terrorist groups,” Fana BC said.

Lawmakers must approve the measure within 24 hours.

The six-month state of emergency was declared on Tuesday after the Tigray People’s Liberation Front (TPLF), a former dominant member of Ethiopia’s ruling coalition, claimed to have captured several towns and said it might march into the capital, according to Addis Standard.

The government has denied having lost control of these towns, but if confirmed, their capture by the rebels would mark a major new stage in the year-long conflict between them and pro-government troops.

Gedion Timothewos, minister of justice, has said during a press briefing that anyone violating the emergency would face three to 10 years in prison, for offences such as providing financial, material or moral support to “terrorist groups”.

“Our country is facing a grave danger to its existence, sovereignty and unity. And we can’t dispel this danger through the usual law enforcement systems and procedures,” Timothewos was quoted as saying.

The Addis Ababa city administration, in a statement, also asked residents to register their weapons and “safeguard their neighborhoods”.

The development comes two days after Prime Minister Abiy Ahmed asked residents of the country to arm themselves against the TPLF.

On Tuesday evening, UN chief Antonio Guterres reiterated his call for “an immediate cessation of hostilities and unhindered humanitarian access to provide urgent life-saving assistance,” according to his spokesman, pleading for an “inclusive” national dialogue.

European top diplomat Josep Borrell was “alarmed” by the declaration of a state of emergency, saying it “will only drag the country and its citizens further into civil war and disintegration.”

U.S. envoy to the Horn of Africa Jeffrey Feltman had earlier said Washington opposed “any movement” by the TPLF towards Addis Ababa or any action to lay siege to the capital city.

Newer PostCOP26: Morocco implemented 50 renewable energy projects, 60 others are in the pipeline
Older PostLibya: PM to reportedly step down in preparation for Dec. 24 presidential elections