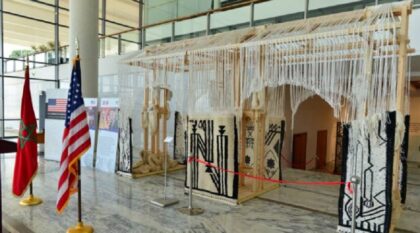 The exhibition “Of Voice and Stone” celebrating the 200th anniversary of the US legation in Tangier and more than two centuries of friendship between the Moroccan and American peoples made a stop Friday at the headquarters of the Abderrahman Slaoui Foundation in Casablanca, after it was displayed in capital city Rabat June 10 to Sept. 15 at the National Library, and before being presented at the headquarters of the US Department of State in Washington next year from March 7 to July 15.

The exhibition “Of Voice and Stone” allows the general public to discover valuable historical items that represent the strategic, economic and cultural ties between the United States and Morocco.

From Jimi Hendrix’s boots, to Nawal El Moutawakel’s Olympic gold medal, to Lady Gaga’s dress and the IKE Jacket from the US Office of Strategic Services, in addition to an immersive experience at the heart of the film Casablanca, the exhibition tends through these different items to shed light on the multiple facets of the relationship between the United States and Morocco, and the two countries’ peoples.

On this occasion, US General Consul in Casablanca Lawrence Randolph said that the long common history and deep cooperation between the United States and Morocco are well known to Moroccans and Americans, noting that this exhibition tells the story of interpersonal ties, namely the story of ordinary Moroccans and Americans who have built extraordinary achievements together.

While thanking the Foundation Abderrahman Slaoui and local authorities for their contribution to the organization of this exhibition, he stressed that the choice of Casablanca emanates from the fact that the city has played a central role in the common relations between the two countries.

Randolph took this opportunity to recall that this exhibition also pays tribute to the understanding and religious coexistence in Morocco and the courage of the late king Mohammed V in protecting Moroccans of the Jewish faith during the Second World War, praising the wise conduct of King Mohammed VI who, like his glorious ancestors, continues to work to further strengthen relations between the two countries.

the Legation Building in Tangier was donated as a gift in May 1821 by Sultan Moulay Suliman to the fledgling United States. This early roadmap has led the two countries on a 200-year journey, and along the way they have traded politics, art, and culture of a vast array.