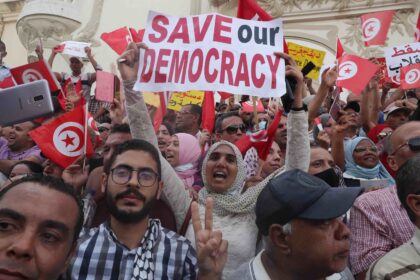 Tunisia’s President Kais Saied has abandoned the house arrest ban imposed on several key figures suspected for corruption and other related offenses.
Chawki Tabib, former head of the country’s anti-corruption Monday on Facebook said an official decision stemming from the interior ministry cancelled the order to keep him under house arrest.

“I came today from my place of house arrest. I want to thank you because you were the reason for this decision,” said lawmaker Yousri Al-Dali said during his participation in Sunday’s demonstration.
Former minister Anwar Maarouf has also been reportedly freed from house arrest.

Saied on July 25 seized the executive power after sacking then Premier Hichem Mechichi and froze the activity of the parliament and in addition, suspended the immunity of lawmakers.
He took control of the interior ministry as he appointed a close aide in a move to hunt down some key state officials and private people suspected for corruption.

The move has met with condemnation at home and abroad. The G7 called on Saied to restore the North African country on the democracy path and end human rights abuses.

The lifting of the house arrest came few days before the inauguration of a new cabinet by Prime Minister Najla Bouden. She unveiled Monday a 24-member team whose top priority is to combat corruption and restore the trust of citizen in the state.