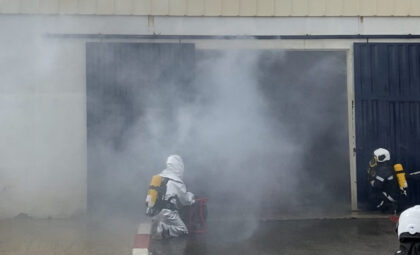 Moroccan and U.S. military personnel this week concluded a major disaster planning exercise and a four-week training program on handling explosive hazards, highlighting the continued strength of the US-Morocco military partnership, the US embassy in Rabat said in a statement.

Members of the Utah National Guard are in Kasr Sghir this week participating in Exercise Maroc Mantlet, the premier disaster planning and preparedness exercise in the Kingdom, alongside partners from the Royal Armed Forces (FAR) and Moroccan civilian agencies.

This year’s exercise, for which the FAR led planning, features a scenario based on a large-scale industrial catastrophe that requires search and rescue both on land and at sea, industrial fire-fighting in a HAZMAT environment, and crisis management at the national level.

“These joint training programs are a critical component of the close, strategic partnership between Morocco and the United States,” said U.S. Army Major General Michael J. Turley, adjutant general of the Utah National Guard, who visited Morocco this week to observe the conclusion of these exercises. “We are always working closely with our Moroccan partners to confront a range of possible threats, including natural disasters or industrial accidents, as well as conventional security concerns.”

According to the statement, Exercise Maroc Mantlet will include international observers from Djibouti, France, Jordan, Mauritania, Qatar, Saudi Arabia, Senegal and Tunisia, the embassy added.

On Friday, Gen. Turley will join other high-ranking Moroccan and U.S. military officials in Kenitra to mark the end of an intensive training program for Moroccan soldiers, Utah National Guard personnel, and U.S. Marines on explosive hazards, such as disarming mines or storing and transporting munitions. More than 20 military personnel participated in the program, formally known as Humanitarian Mine Action and Explosive Ordnance Disposal training.

Morocco participates in more than 100 military engagements with U.S. forces yearly. It hosts African Lion – the largest yearly military exercise on the continent – and is a major partner in both the U.S. International Military Education and Training and Foreign Military Sales programs.

In October 2020, the United States and Morocco signed a ten-year “Roadmap for Defense Cooperation” that guides cooperation in priority areas, including efforts to more effectively face regional threats together.

Newer PostCycling: The 2025 World Championships in Rwanda, a first in Africa
Older PostMoving testimonies rise high in Geneva at a conference on human rights violations in the Tindouf camps