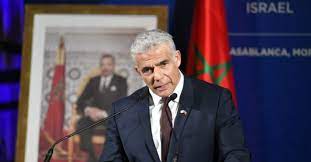 Lapid said that the upgrade will take place after Morocco’s airlines launches direct flights to Israel. The announcement has not been confirmed by Rabat yet.

Speaking to the press in Casablanca, Lapid voiced satisfaction over the promising prospects for relations with Rabat adding that normalizing ties with Morocco would encourage other countries in the region to follow suit.

Morocco has a central role to play in the resumption of negotiations with Palestinians, said Lapid adding that he supports the two-state solution but conditions are not propitious right now to kickstart the political process given Palestinian divisions and the composition of the Israeli government.

However, he said his government would refrain from undermining prospects for the resumption of talks.

Lapid raised the Sahara issue and the Algerian role in perpetuating the conflict as well as Algiers close ties with Iran and its hostility to Israel which he said is a matter of concern.

It was also a chance to reiterate Morocco’s position in favor of the two-state solution with Jerusalem as a capital of a Palestinian State living in peace side by side with Israel.