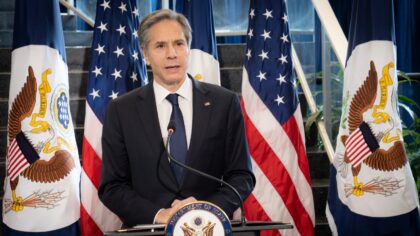 US Secretary of State Antony Blinken welcomed Wednesday’s visit by Israeli Foreign Minister Yair Lapid in Morocco as the two countries built on the normalization agreement signed last year under a US-brokered deal.

Blinken in a statement called the visit, along with the reopening of the Israeli liaison office in Rabat, “significant for Israel, Morocco, and the broader region.”

“The United States will continue to work with Israel and Morocco to strengthen all aspects of our partnerships and create a more peaceful, secure, and prosperous future for all the people of the Middle East,” Blinken said.

The State Department Spokesman Ned Price on his part described the visit, at his daily press briefing Wednesday, as “another important step in strengthening” relations between Morocco and Israel.

“We are convinced that normalized relations between Israel and its Arab neighbors create new opportunities for peace and prosperity to flourish in the region,” Price said.

“The relationship between Morocco and Israel has already led to real benefits for both countries, including direct commercial flights, economic cooperation and the opening of liaison offices,” added the spokesman.

According to analysts, the normalization agreements brokered by the previous White House were among the few Trump foreign policy initiatives that the current US administration says it supports and seeks to build on.