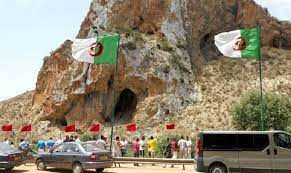 Taken by surprise by the new call for dialogue launched by King Mohammed VI, the greedy, feckless and oppressive Algerian rulers shied away and unleashed the state-controlled media against Morocco and its institutions.

In a speech delivered Saturday on the occasion of Throne Day, the Moroccan Monarch called on Algerian president to open borders and work together, without conditions, for the development of bilateral relations based on trust, dialogue and neighborliness, affirming that the two countries are not only neighbors but twins whose security and stability are inseparable.

Instead of responding positively to the wise and sincere royal call, the Algerian military junta, de facto ruler, remains silent, while the regime’s mouthpiece media outlets launched a major bashing campaign targeting their neighboring country which supported their independence, resistance and struggle for liberation from the yoke of French occupation.

Al Watan daily, close to Algerian intelligence services, quoted only one excerpt from the royal speech wherein the Sovereign said that “the security and stability of Algeria (…) and Morocco’s are inseparable”, before describing the North African Kingdom as an “aggressor” that “has declared war against Algeria”.

The daily cited in this regard the Pegasus spyware, the remarks of Morocco’s permanent representative to the UN Omar Hilale on Kabylie, ignoring the King’s commitments to the Algerian people that Morocco will never cause them any evil or problems.

“Nor will my country put you in peril or under threat. That is because what affects you affects us, and what befalls you harms us”, said the Monarch in his Throne Day speech, underlining the benefits and positive impacts of the opening of borders on both countries.

But for Al Watan, it is just a ploy and diversion, urging Algeria to keep its borders closed, because, it claims, this situation has been “disastrous for the Moroccan economy.”

This false reasoning has been largely reproduced by most Algerian newspapers, including L’Expression, L’Indépendant, Echourouk…, claiming that Morocco has been forced to reach out to Algiers because it has been suffocated by the closure of borders.

But in reality, it is Algeria which has been asphyxiated by deepening social, economic, and political crises, while a growing number of Covid-19 patients are in dire need of oxygen and are left to die in overcrowded hospitals lacking medicines, protective gears, ICU beds and ventilators.

This catastrophic situation has even pushed Algeria’s Consul General in Geneva to launch an urgent appeal to Algerian expatriates to make donations (financial/medical equipment…) to alleviate the sufferings of their infected brothers abandoned to their fate.

On many occasions, Algerian president Abdelmajid Tebboune had said that his country has the best health system in the region and in Africa but when he got infected with Covid-19, he was flown in emergency to Germany to receive premium medical treatment. Chief of the Polisario armed militia was also transferred by Algerian military rulers to Spain to receive treatment against coronavirus.

But the hefty hospital bills, including drugs, nursing, air transport…were paid with the money of Algerian taxpayers who are left to die in crumbling hospitals in complete disregard and indifference of the top brass who are interested only in lining up their pockets.