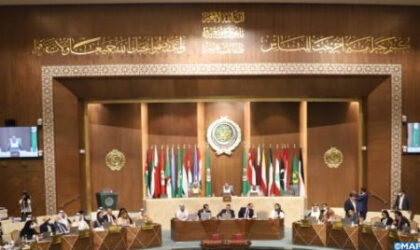 The European Parliament’s resolution against Morocco is a provocation and an unacceptable denial of the efforts made by the Kingdom in the fight against illegal immigration, said the Arab Parliament at the end of its emergency meeting held Saturday in Cairo.

The Arab Parliament rejected the baseless accusations of the European Parliament and denounced its interference in a bilateral crisis between Morocco and Spain, which can be resolved through diplomatic means and direct bilateral negotiations between the two countries.

In their decision adopted Saturday, the Arab MPs praised the tireless efforts made by Morocco in the fight against illegal immigration thanks to the strong political will and clear-sighted guidance of King Mohammed VI, leader of the African Union on the issue of migration.

The Arab Parliament cited in this regard the international conference hosted in December 2018 by Morocco on the Global Compact for Safe, Orderly and Regular Migration, the African Migration Observatory based in Morocco and the adoption of the African Agenda on Migration by the African Union. This agenda was submitted to the 30th African summit held in Addis Ababa in 2018, by King Mohammed VI, in his capacity as leader of the African Union on the issue of migration.

All these international events confirm the national, regional and international efforts made by Morocco in the field of migration contrary to the false allegations contained in the EP resolution, said the Arab Parliament.

It also stressed the need to open the case of the Spanish occupation of Moroccan cities of Ceuta & Melilla and Moroccan Islands, voicing strong solidarity with Morocco against the European resolution.

The Arab Parliament also expressed its total rejection of the EP unacceptable arrogant approach in dealing with Arab countries’ issues saying such approach undermines the strategic partnership between Arab and European countries.

It called on the European Parliament to adopt responsible positions that strengthen cooperation and joint coordination between the Arab and European countries, stressing the need to deploy an Arab action plan to counter such adverse moves to ensure the respect of sovereignty of Arab countries and non-interference in their affairs.