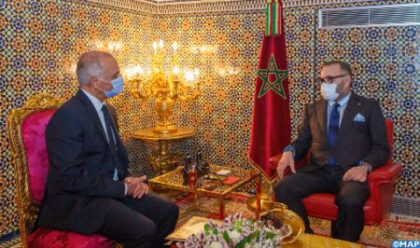 Head of the special committee on the new development model, Chakib Benmoussa, submitted the final findings of the committee in a detailed report to King Mohammed VI, the Royal office said Tuesday, adding that the new model shall serve as a National Pact for Development.

The report was commissioned by the Monarch as part of efforts to consolidate the social project, strengthen values of citizen involvement and belonging to the Moroccan nation.

The committee carried out its tremendous task in a difficult context marked by Covid-19 challenges and has tackled vital sectors including health, agriculture, food security, energy, tourism and industrial development, the Royal Office said in a statement.

The King congratulated Benmousa and the committee members on the efforts made and the participatory approach adopted which involved an array of stakeholders from political parties to the civil society as well as ordinary citizens from across the Kingdom.

The new report should thus serve to gear efforts towards achieving the country’s development goals to the best interest of its citizens.

In this respect, the King ordered the publication of the CSMD report and asked the committee to present and explain its findings to citizens and different stakeholders across the country.

In addition, the government and the different actors and institutions are invited, each in their area of expertise, to participate and actively contribute to the implementation of the relevant recommendations of this report, in order to serve the new ambition and the new development course, to meet the expectations of the Moroccan King and people, the statement pointed out.

King Mohammed VI had appointed Chakib Benmoussa to head the CSMD on November 19, 2019. Three weeks later, the names of the committee’s 35 members were revealed. They included outstanding figures who have assumed governmental functions under the reigns of the late King Hassan II or Mohammed VI, such as Driss Jettou, who was then president of the Court of Auditors; Ahmed Reda Chami, President of the Economic, Social and Environmental Council; and Mustapha Terrab, Chairman and CEO of OCP Group.

The Committee was due to submit its report in June 2020. However, the deadline was postponed in view of the Covid-19 pandemic and in order to enable the committee to broaden its consultations.