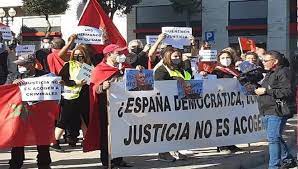 Morocco’s strongly worded response to Spain’s decision of hosting Polisario leader describes the move as “a premeditated act, a voluntary choice” and a “deplorable situation”.

In a statement issued by the Foreign ministry, Morocco says it takes full note of the Spanish “sovereign decision” of not informing it about the secret transfer from Algiers to Spain of the Polisario chief Brahim Ghali, who is accused of war crimes and serious human rights violations.

Rabat rejects the Spanish attempts to justify “this serious act” contrary to the “spirit of partnership and neighborliness”, saying this “negative attitude” cannot be justified “on humanitarian grounds”.

Furthermore, the “humanitarian justification” cannot be used as a pretext for hatching a plot behind the backs of a partner and a neighbor”, says the Foreign Ministry’s statement.

Morocco blasts the selective use of “humanitarian grounds” in the case of the leader of polisario militias, while thousands of people suffer inhumane conditions in the Tindouf camps”.

Rabat also criticized the inaction of the Spanish justice, affirming that humanitarian grounds are not an excuse to deny the rights of the victims to seek justice for rape, torture and serious human rights crimes committed by polisario chief.

For the Moroccan government, “preserving bilateral partnership is a shared responsibility, based on mutual trust, fruitful cooperation and upholding the two countries strategic interests”.