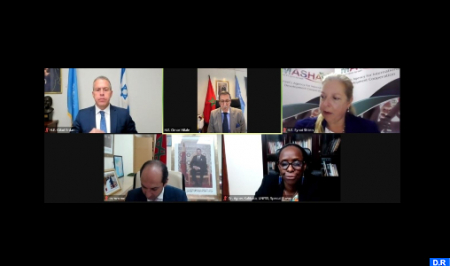 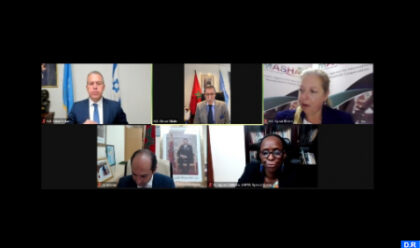 The Moroccan and Israeli ambassadors to the United Nations Omar Hilale and Gilad Erdan co-chaired on Thursday a high-level virtual conference on “Planting for the future: Food security and innovative agriculture”.

Co-organized by the Permanent Missions of Morocco and Israel to the UN, the meeting took place on the sidelines of the 54th session of the UN Commission on Population and Development.

This event, which also coincided with the celebration of Earth Day, was marked by the participation of the ambassadors of several countries, UN Secretary-General’s Special Envoy for 2021 Food Systems Summit, Agnes Kalibata, Head of Israel’s International Development Agency (MASHAV), Eynat Shlein, and the Director General of the Moroccan Agency for International Cooperation (AMCI), Mohamed Methqal.

Speaking during the event, the Moroccan ambassador to the UN noted that this Moroccan-Israeli initiative testifies to the driving role that cooperation can play in the field of sustainable agriculture, climate change, management of water, renewable energies and trade cooperation.

“As we prepare for the Food Systems Summit next September, now is the time to work on strong partnerships and accelerate much needed action,” said Omar Hilale. “In fact, if there is one lesson we can learn from the global COVID-19 crisis, it would be to turn it into an opportunity to rebalance and transform our food systems and plant for the future,” he pointed out.

The diplomat stressed that in Morocco agricultural science has acquired enormous potential and has increased the yields of farmers to produce more food with less water and energy. He also cited Morocco’s Green Plan, a national agricultural strategy launched in 2008 that has helped boost agriculture and make it the main engine of growth in the national economy, creating jobs and reducing poverty.

“Morocco’s vision on agriculture aims to ensure national food self-sufficiency and opens up the possibility of exporting quality farming products to the world,” Ambassador Hilale said.

He underlined in this context that Morocco and Israel have agreed to cooperate in several sectors, including food industry, applied research in industry, green technologies and renewable energies, which can all contribute to intensify existing initiatives, and benefit a wide range of countries, particularly in Africa, in the area of agriculture and agro-industry.

Israeli ambassador to the UN Gilad Erdan noted that the year 2020 “has taught us the urgency and the importance of bringing up the issue of food security, and the technologies that will help us achieve this important goal, which is at the top of the global agenda.”

In this regard, he said that Israel was proud to present at the United Nations level a resolution on agricultural technologies for sustainable development. This resolution, he explained, will help focus the world’s attention on technologies that can help developing countries feed their own people and help them advance in many development areas.

For his part, head of the Moroccan Agency for International Cooperation (AMCI), Mohamed Methqal recalled that agriculture, an important sector for Morocco, accounts for nearly 40 pc of the national GDP.

He also underscored the importance of South-South cooperation, considered by King Mohammed VI as a major pillar of the Kingdom’s foreign policy.

To contribute to this effort, AMCI has sealed partnerships with some 170 partner countries, particularly in the sectors of agriculture, irrigation and water management, he said. The agency also conducts technical training programs in the agricultural sector as well as capacity building programs within the framework of triangular cooperation, he added.

For her part, UN Official Agnes Kalibata congratulated the permanent missions of Morocco and Israel for the organization of this event which coincides with Earth Day, underlining that “Morocco and Israel are living examples of what innovation can achieve in the agricultural sector.”

She also praised the various initiatives and cooperation actions conducted by Morocco in favor of the countries of the African continent, in particular through the Initiative for the Adaptation of African Agriculture (AAA), launched by Morocco and which aims to reduce the vulnerability of Africa and its agriculture to climate change.

Speaking on this occasion, several ambassadors of the UN member countries, representing in particular the African and American continents, commended Morocco and Israel for this initiative and for their leadership on the crucial issue of agriculture and food security.

They also welcomed the level of cooperation between their respective countries and Morocco, and commended Morocco’s actions and initiatives in favor of the countries of the African continent and the South in general.

Other participants underlined the urgent need to adopt a new approach to farming as the world faces rampant food insecurity, exacerbated by climate change and other environmental problems, and to opt for new modern and efficient farming techniques, and for a better management of soils and water resources.