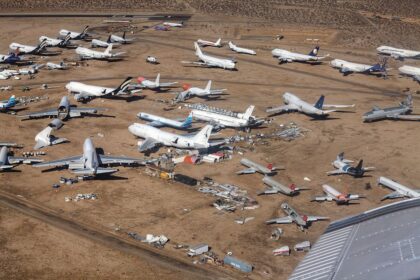 Morocco is planning to set up an aircraft boneyard near the Oujda Angad airport, oriental region of the Kingdom. This project has been unveiled by Morocco’s National Airports Office (ONDA) which has called for international tenders to build and operate a centre for the storage, disassembly and recycling of retired airplanes.

In its first phase, the site will cover a 10-hectare area which can be extended up to 54 ha depending on the operator’s growth activities.

The opening of the bids submitted for this project is scheduled for June 8, 2021. After studying the proposals of the bidders, the ONDA will announce the winner of the renewable 10-year contract.

Following the outbreak of the coronavirus which hit hard the global travel industry, airline companies grounded their fleets and struggled to find a space for planes as storage facilities were completely full.

The global demand is increasing as carriers are facing more headwinds. Many analysts think that a return to pre-covid levels is going to take many years. In 2020, the airline industry suffered over $84 billion of revenue losses due to covid-19, according to the International Air Transport Association (IATA).

In the storage or retirement facilities set for aircrafts, planes can be either parked or stored for long periods and then returned to service, or broken up to sell their parts. It is generally cheaper to park an aircraft at a storage facility than at an airport.

Some of the world popular storage facilities are located in zones in the United States, Spain and Australia. Emboldened by its dynamic aeronautic industry, qualified manpower and competitive assets, Morocco wants a slice of this lucrative business as the aviation industry is set to become greener with technological advances, outperforming old aircraft which become commercially unviable.

According to experts, the plane’s engines and spare parts can be reused in other aircraft or sold to training companies where they are used for pilots, aircrew and even counter-terror exercises.

Besides the aircraft engine, other valuable parts include the air conditioning system, the escape chutes and the landing gear. Furthermore, the plane’s recycled metals, especially aluminum, can be used in the manufacturing, car, construction and bicycle industries.