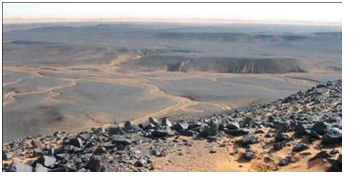 Algerian state media announced that the country signed a memorandum of understanding with a consortium of Chinese companies to exploit an iron ore in Tindouf, near the Moroccan border, in a move that violates an agreement signed with Morocco.

The consortium, which includes China International Water & Electric Corp, Heyday Solar and the iron and steel manufacturer Metallurgical Corp Of China, will carry out the $2 billion project in partnership with Algerian National Company of Iron and Steel (Feraal).

In 1972, Morocco and Algeria signed a joint venture to tap into the Ghar Jbilet iron mine with a 12 billion tons proven reserves.

The Moroccan-Algerian deal was part of a border agreement that could have ushered an era of joint exploitation of the mine by facilitating exports through Morocco’s Atlantic ports.

By signing the new agreement with China, Algeria is actually faithful to its tradition of violating agreements with its neighbor Morocco. The Chinese deal also comes in a context marked by rising tensions between Morocco and Algeria over the Sahara territory where Algeria seeks a chimera state for its Polisario puppets.

The mine has been left in oblivion ostensibly due to the high phosphorus components which make extracting iron expensive.

Some economic experts however down play the Algerian-Chinese announcement as a distraction amid rising social tensions.

Algeria’s finances have been hit hard by falling oil prices and dwindling production capacity and sees mines as the only rescue due to a severe lack of economic diversification and heavy dependence on hydrocarbons.