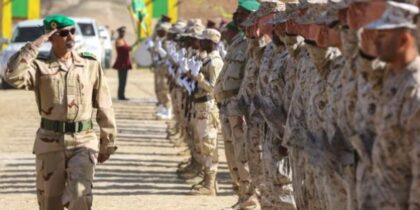 Mauritania is preparing for military drills near its northern borders with Algeria and Morocco in a bid to boost the readiness of its army to respond to Polisario incursions.

The Polisario has often violated the territories of Mauritania to engage in provocations of Morocco’s armed forces and in all sort of trafficking in connivance with trans-border criminal and terrorist groups.

The choice of the area between the Moroccan Sahara and the Algerian border was not accidental as the area in the region of Tiris Zemmour is also home to iron deposits that Mauritania would like to extract.

The military games will be the largest ever held by the Mauritanian army bringing together special forces, anti-terrorism commandos and parachutists as well as the air force.

Mauritania has suffered by the past from Polisario’s terrorism and banditry, the latest aggression was the attempt by the Algeria-backed separatists to undermine Nouakchott’s economy and its food security through blocking the Guerguarat crossing with Morocco for three weeks.

But the intervention of the Moroccan armed forces in mid-November and the extension of the security wall to the Mauritanian border put a lasting end to Polisario’s provocations in the territory much to the delight of the transborder truck drivers and travelers between West Africa and Morocco.

Mauritania has also been alerted by the recent statements of the leaders of the Polisario militias including their head Ibrahim Ghali who warned that Mauritania will not be spared from Polisario attacks.

Mauritania responded to Polisario threats by setting up a critical defensive zone which was delimited to prevent any infiltration by Polisario armed men into the Mauritanian territories.

The chief of staff of the Mauritanian army has also travelled to Algiers in the wake of Polisario threats and voiced concern to Algeria’s kingmaker Said Chengriha regarding incursions by the separatist group into Mauritanian lands while urging Algiers to put pressure on the Polisario militias to abstain from violating the defensive zone.

In 2017, Mauritania ordered the closure of its borders with Algeria and declared its north-eastern borders a military zone forbidden to civilians following the involvement of Polisario members in drug trafficking in the area.