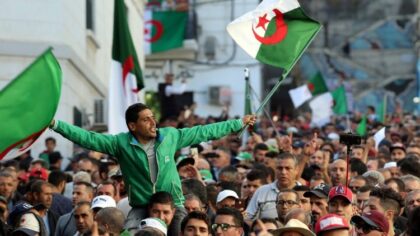 The CIA has depicted in a confidential report a bleak picture of the situation in Algeria rattled by political inertia, clans’ internal fights, the regime’s failures and contradictions, an unpopular and uncharismatic president, and a deep economic crisis which  exacerbates popular discontent and warned that Algeria would face a general conflagration in the medium term, if the people’s claims are not met.

A US diplomat said “the picture is very gloomy” after he read the CIA report that was circulated in a very small circle in the White House and the State Department, according to a media source.

The authors of the document, who have closely followed, for more than a year, the politico-social developments in Algeria, have pinpointed the political immobility which is currently affecting the country, and which is due not only to the Covid-19 pandemic, but also to the failures and contradictions which seem to become a constant of the army-controlled regime.

The report noted that the Hirak, which broke out in February 2019, has shaken the core of the Algerian power even if it did not lead to its fall. The wavering power then adopted contradictory and inconsistent measures combined with a confused communication.

Additionally, the CIA underscored that the multiple clans in power have been prey to a genuine internal war for several years with endless twists and turns. The army, the true matrix of Algerian power, is not a monolithic bloc, the report remarked.

The authors of the report explained in this connection that the clan of General Chengriha, head of the army, is currently dismantling the system set up between 2015 and 2019 by his predecessor, the late General Gaïd Salah. During this period, General Gaïd Salah was working to unravel the “DRS State” designed during 25 years by General Mediène and his allies. According to the CIA report, this feud between major military figures is paralyzing the Algerian state apparatus, mainly the presidency and the government.

At the presidency, the top brass inherited Abdelmedjid Tebboune, and had to put up with an unpopular and uncharismatic president. Affected by Covid-19, the president, who claimed loudly that his country had the best health system in Africa, was evacuated to Germany for emergency care. For Algerians the humiliation is total. They chased away a bedridden Bouteflika only to end up with a very diminished Tebboune.

And to make matters worse, the presidency is shaken by tensions between the various advisers of the president. Between hesitations, absence, and approximations, Algerians feel completely lost. Foreign chancelleries too, the CIA report stated.

Within government, blunders have become a mode of governance.

As the pandemic hit the country, government officials showed their lack of insight. Under pressure, the government is unable to supply the country with masks and artificial respirators. The figures for reported cases of infections are below reality. Algeria is in the midst of a crisis, due to political rigidities, interventionist centralism and administrative embolism.

Besides, the crisis is not just affecting the health sector. It is affecting both the financial system and the food supply chain, said the report. Thus, queues are observed in front of ATMs, as well as in front of mini markets and grocery stores, pushing the population to the brink. Milk, semolina and pasta are disappearing from the shelves, reminding elderly Algerians of memories of another era.

The CIA document also dealt with the recent announcements made by the Algerian president, saying these announcements have rather had a negative impact on Algerian public opinion.

“Algerians no longer expect anything from the current political class. They throw up the whole system and think the army stole their revolution from them,” said a Western diplomat in comments on the US document.

If Algerian rulers persist in ignoring the public outcry, Algeria would face a general conflagration in the medium term, the report said.