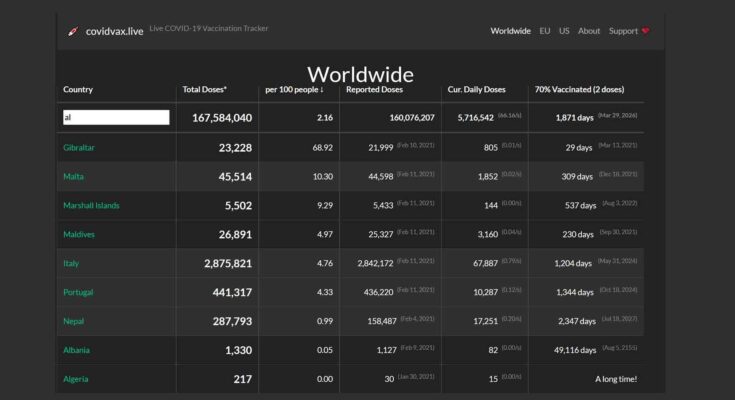 Morocco at the forefront of vaccinated population, Algeria lagging behind at the bottom 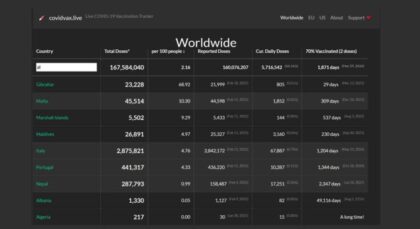 Less than three weeks after it launched its large-scale immunization campaign against COVID-19, Morocco has inoculated 1.4 million people in a campaign that is unfolding in the best conditions and witnessing a strong mobilization of citizens, while in Algeria the pseudo-vaccination campaign is taking place in total chaos.

According to the real-time vaccination counting site “covidvax.live” which gives a live count of vaccines administered around the world, Algeria is at the bottom of the ranking with barely 240 people vaccinated so far.

Yet, medical sources in Algeria explain this sluggish pace by favoritism. According to these sources, 240 doses of the precious vaccine were inoculated in priority to senior army officers, at their head the Chief of Staff, General Said Chengriha, and to a few privileged members of the regime.

As to the promised mass vaccination campaign, the organization upstream has failed. Since the arrival of the first batch of 50,000 doses of the Russian Sputnik-V on January 28, authorities have been turning in circles, unable to put in place the necessary logistics.

Additionally, two weeks after the launch of the vaccination campaign on January 30, even the apps for booking appointments are not working, which only exacerbates skepticism and the feeling of “Hogra” among Algerians, especially when they compare the situation in Algeria and the situation in Morocco.

In the Kingdom, besides the mobilization of the health department, health workers, and local authorities, King Mohammed VI is closely following the unfolding of the campaign, urging the government to ensure its continuity with the same pace and the same spirit of responsibility.

The King also ordered that the vaccines be available for free to all Moroccans and foreign residents over the age of 17.

However, the first immunization phase targeted health personnel, security forces and teachers in addition to people aged over 75. This week, it has been decided to extend the vaccination to people aged 65 after Morocco received a new batch of 4 million AstraZeneca following the first batch of 2 million doses of AstraZeneca and half a million doses of the Chinese-made Sinopharm vaccine.

Vaccinations are administered, under the auspices of the national immunization program, at a total of 2,880 fixed points in hospitals, universities, sports centers and workplaces, as well as 7,000 mobile centers.

Morocco, which ranks twelfth on the Oxford University list of new vaccinations, outstripping by far Algeria, expects to reach herd immunity in three to five months.

Yet, despite the progress made in the struggle against the spread of the coronavirus and the decreasing rate of fatalities, restrictions and health measures would remain in place, and it would not be until after the end of the vaccination campaign that the government would introduce more lax measures, enabling a restoration of normalcy.

Meanwhile, Algerians are still waiting for their authorities to wake up and fulfil their responsibilities towards the people, instead of privileging those sitting at the top of the power pyramid.