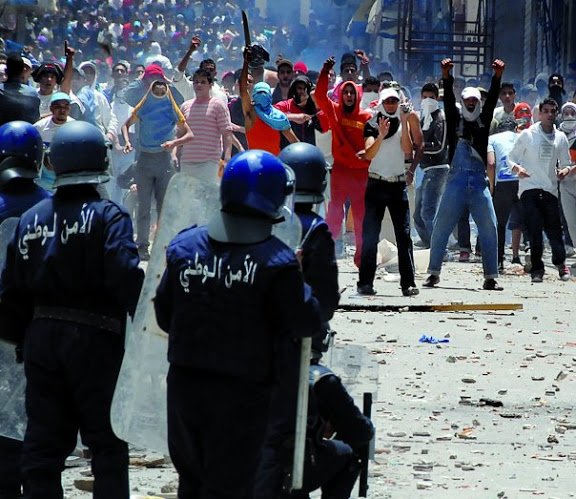 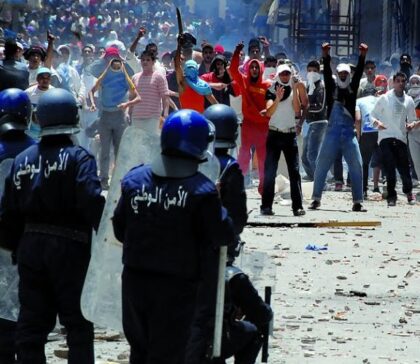 Algeria’s oil and gas rich south is a tinderbox waiting to explode! The youth in Ouargla and many other cities took to the street, torched tires and blocked roads in violent protests after their calls for jobs and better living conditions fell on deaf regime ears.

Unrest is not new to Ouargla where the population bemoans decades of marginalization. The region sits on Algeria’s largest gas and oil reserves but the population complains these resources are invested in the north leaving the youth without jobs.

Algerian social media is awash with videos showing angry and disenchanted youth clashing with anti-riot police. They deplore the squandering of their region’s oil and gas wealth.

The protests came after a series of demonstrations against the degradation of economic conditions and living standards in Algeria. The restive Kabylie region, Jijel and other cities have been rattled by protests that the regime fear would lead to a new Hirak.

These protests take place two weeks before the second anniversary of Algeria’s pro-democracy movement that demands a clean break with a military regime perceived as inefficient and corrupt.

Algeria has inherited a strongly centralized regime that has concentrated all the nation’s wealth and institutions in northern towns. As a state that has no antecedent in history, Algeria’s current borders have been inherited from colonial France, which has attached the Sahara desert to Algiers with disregard for nations such as the Tuaregs and for regions that have been historically Moroccan.

When autonomy was proposed for the Touareg’s in Mali to settle the uprising in 2013, Algiers opposed the idea in fear of a spill over. Algeria, as a centralized state, dreads the awakening of its Touareg population to demand self-determination, a principle, which Algeria has often used to unsettle Morocco.

In addition to the province of Tamanrasset, the restive Algerian southern towns of Ouargla and Laghouat have witnessed in the recent past violent clashes between security forces and protesters who accuse the government of robbing the gas wealth and investing in the north while leaving their provinces poor and underdeveloped.

The city of Ghardaia, also in the south, has been rocked by clashes due to a regime legacy of discrimination against the Amazigh locals.

The Algerian south is also a safe haven for cross border criminality, terrorism and traffickers adding insecurity to under-development and uneven investments.

Porous borders and regime connivance with some armed groups have amplified security threats for Algeria’s neighbors in the Sahel who complain of Algeria’s hegemonic aims and its ambiguity in fighting terrorism.

Several countries, international organizations, and media have sounded the alarm regarding the explosive situation in the North African country.

After the US State Department recently raised the level of its warning to US travelers wishing to travel to Algeria to Level 4, the highest level on its scale of insecurity, COFACE, a major French economic organization, which assesses the level of “country risks” throughout the world, warned that 2021 risks to be a complicated year in terms of stability in Algeria.

Regarding the Algeria risk in 2021, COFACE notes that the country is exposed to the danger of “the prevalence of poverty, the lack of job opportunities and the difficult economic context, exacerbated by the health crisis.”

Yet, according to COFACE, the other dangerous element that makes Algeria a country at high risk is “the feeling that nothing is really changing in governance.” This feeling could probably fuel popular discontent, warns the French organization.

“The military and government tolerance of the unrest could decrease and security measures tightened. In addition, the major role played by the military on the internal scene could increase abroad, in a context marked by infiltrations of jihadists from Libya and Mali.”

COFACE which insists on the fragility of the political situation in Algeria notes that this fragility directly threatens its ability to resist the economic and financial crisis triggered by the COVID-19 pandemic.