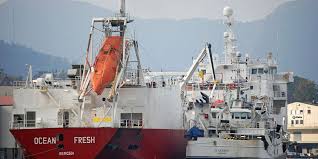 Mauritania’s customs have released five vessels belonging to Ocean Fresh Food AS, a Norwegian company which has accepted to pay €2.6 million in fine, Le360.ma reports.

Ocean Fresh Food AS according to its lawyer, Brahim ould Ebetty, has agreed to pay the penalty in a move to settle the lawsuit launched against it by the Mauritanian customs.

The Mauritania government sued the firm for custom infraction over 2012-2020 period. The company according to the Mauritanian state enjoyed help from former President Mohamed Ould Abdelaziz’s administration.

Abdelaziz who ran the country from 2009 to 2019 is being investigated for corruption and state funds embezzlement.
The company’s lawyer Ebetty denied any links with the former leader’s entourage.

A court in capital Nouakchott in August last year authorized the customs to temporarily seize five vessels belonging to Ocean Fresh Food AS until the company pays the penalties.