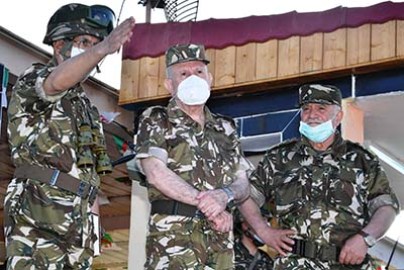 Warmonger Chengriha has warned in an address in front of soldiers and officers of a looming terrorist threat and attended the tactical drills in which Algeria exposed its Russian tanks and anti-tank Kornet missiles as well as attack helicopters.

The aim of the exercise, supposedly training the army to face terrorist groups, raised eye brows of military analysts. Heavy artillery is only used in conventional wars and proves little if no efficiency in asymmetric wars opposing a regular army to agile terrorist groups adopting the guerrilla warfare tactics.

With all its heavy arsenal, Algeria failed to quell terrorism in its borders, especially its south and north eastern mountains where the country has restricted travel for decades.

Algeria, Africa’s top arms buyer, has failed to protect its oil installations which were attacked in 2013 by terrorist groups. Its eastern and southern porous borders are a safe haven for all sorts of terrorist and criminal groups that engage in all sorts of trafficking.

Yet Algeria’s obsession with Morocco makes it turn a blind eye to all the real security threats to focus on its western borders with Morocco, the most stable and peaceful by far.

Analysts said that the drills are rather a message to quell the Hirak by waving the card of war with Morocco which the army, through its propaganda, portrays as the real enemy at the gate.

Moroccan pundits also fear that in the face of the series of diplomatic setbacks Algeria and its puppet the Polisario have ensued recently, they may escalate through provoking the Royal Armed Forces into skirmishes in order to distract the Algerian public opinion from the impending economic and political crisis.

Algeria, whose president is absent receiving treatment in Germany, is living a leadership vacuum filled by warmongers such as Chengriha who called Morocco on multiple occasions as the “conventional enemy.”

The drills are also a matter of spectacle in a state run by the army which seeks to show that it is the glue that holds the country together.

But as cracks are widening in the military-run regime in Algeria especially by the Hirak the army may play the card of war with Morocco as its last option to stay in power.

But such a move to galvanize support for the army through provoking Morocco will backfire as the people of Algeria, as was expressed with the Hirak, view army generals as corrupt and demand a clear break with army rule.

Meanwhile, Algeria’s social peace crumbles in tandem with the depletion of hard currency.