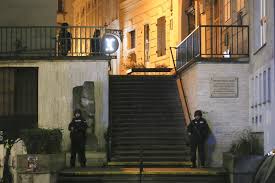 Morocco condemns in “the strongest possible terms” the terrible attacks that hit Monday Vienna, said Tuesday minister of Foreign Affairs Nasser Bourita, expressing sadness at these attacks that hit the heart of Central Europe, in Vienna.

Bourita made the remarks during his participation this Tuesday at the Annual Mediterranean Conference of the Organization for Security and Cooperation in Europe (OSCE), held in Vienna by video conference, reported MAP.

“We stand together with the Austrians in these moments of pain as we stand against violence, hatred and rejection of otherness,” the minister stated.

The perpetrator of the Vienna attacks, who was shot by the police, was a supporter of the Islamic State terrorist organization (IS), Austrian Interior Minister Karl Nehammer said Tuesday.

Three were dead in the attack, President of the Viennese police Gerhard Puerstl said.

Regarding the OSCE’s Mediterranean Partnership, Nasser Bourita underlined that the annual holding of this conference is a demonstration of its vitality.

“Our relationship, which dates back to the Helsinki process, has never lost its relevance,” he explained at the Political Segment held under the theme “Comprehensive Response to Current Security Challenges: Promoting Security through Sustainable and Economic Growth during the COVID-19 Pandemic.”

This relationship is now more relevant as both OSCE members and Mediterranean partners continue to fight the Covid-19 pandemic and its devastating consequences, Bourita underlined.

The Minister also emphasized that Morocco – which is factually the closest country to Europe – has always been committed to the Mediterranean.

“The partnership with the OSCE is definitely part of this commitment. Morocco strives to establish a strong, sustainable and diversified partnership,” he added.

“The Mediterranean landscape is a land of opportunities, but also a land of challenges…it is subject to antagonistic trends that foster both virtuous and complex dynamics,” he said.

“Virtuous dynamics, because our region has positively evolved. Success stories are numerous. Mediterranean countries have succeeded in maintaining their political stability; they have sustained their economic vitality, and Mediterranean elites have acquired more dynamism,” he explained.

“In parallel, complex dynamics are at stake. The challenges facing the Mediterranean are chronic, structural and new at the same time,” he said, while mentioning the acute economic and demographic gaps between the two shores.

Bourita also spoke of the seriousness of ecological issues, indicating that the Mediterranean is one of the regions most threatened by climate change.

“In addition to the Palestinian question, “which remains central to our region,” growing tensions and proxy wars bear threats to the stability and security of the Mediterranean,” the Moroccan official underscored, adding that the terrorist threat is all the more tangible as the Mediterranean “finds its extension in the Sahel region, breeding grounds of terrorism and violent extremism.”

Commenting the perception and role of Morocco, Bourita said that the Kingdom, under the leadership of King Mohammed VI, has always strived to be a provider of peace in its region and a bridge builder between regions.

Morocco calls for an approach that is holistic and that considers the inter-sectionality of challenges, he added.

“Whether it is migration governance, fight against terrorism or struggle against climate change, we implement multi-disciplinary approaches that never stop at the purely security dimension, but also include economic, social and even religious components,” the minister said.

“We stand for an approach based on shared responsibility and non-interference. It is something we believe in and something we do. We did it in Skhirat, to promote the Libyan Political Agreement of December 17, 2015. We did in Bouznika, to promote inter-Libyan dialogue and we keep doing it,” Bourita stated further.