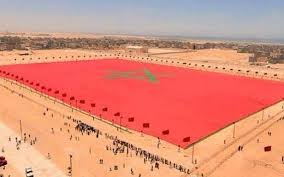 France calls for not hampering trade and civilian traffic in Guerguarat

France expressed, on Friday, its concern about “the current obstruction situation” caused by the Polisario and its militias in the buffer zone of Guerguarat, warning that such a situation is likely to create tensions that would undermine the political process aimed at reaching a final solution to the regional dispute over the Moroccan Sahara.

“France is worried (…) about the current obstruction situation in the buffer zone of Guerguarat, which is likely to create tensions that would undermine the political process”, underlined the France’s permanent representative at the UN, Nicolas De Rivière, in remarks on the vote on resolution 2548, adopted Friday by the Security Council.

“We give our full support to the statement by the spokesperson of the Secretary-General calling on the parties to exercise self-control, in order to avoid any escalation, especially in Guerguarat. We also support his call not to hinder commercial and civilian traffic and not to alter the status quo of the buffer zone. France supports the efforts of MINURSO in this regard,” said ambassador Nicolas De Rivière.

The diplomat also reiterated France’s concern over “the increase in violations attested in the latest report of the Secretary-General of the United Nations”, in direct allusion to provocations and violations by the Polisario of the military agreements in the Sahara. The diplomat also called for the full implementation of the ceasefire agreement.

“We reiterate our full support for MINURSO, which plays an essential role in ensuring respect for the cease-fire and is a key factor in ensuring the stability in the area. It also helps create the conditions conducive to the resumption of the political process,” added De Rivière.

Referring to this political process, the French ambassador reiterated his country’s position which “considers that the Moroccan autonomy plan of 2007 is a serious and credible basis for discussions with a view to resuming the dialogue”.

In this regard, he recalled France’s full support for the efforts of the UN Secretary General in favor of a just, lasting and mutually acceptable political solution to the Sahara issue, in accordance with Security Council resolutions.

The American diplomatic mission to the UN has also expressed support to the UN-led political process in the region and affirmed that the Moroccan autonomy initiative is “serious, credible and realistic” for the settlement of this regional dispute.

“We consider the Moroccan autonomy plan as serious, credible and realistic, and it represents a potential approach to meet the aspirations” of the people of the Sahara to manage their local affairs “in peace and dignity,” the US delegation stressed at the UN in its explanation of its vote on this resolution.