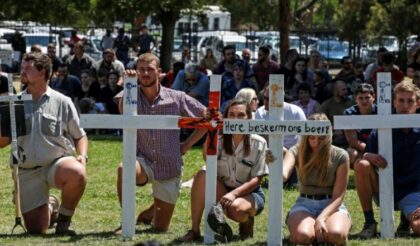 The killing of a 21-old farmer in Free State province, last week, has ignited protests and raised fears about the risk of new racial tensions in South Africa, one of the most violent and unequal countries in the world.

Several hundred angry farmers took to the streets in capital Pretoria to denounce the killing of the young man, a white farmer who was found tied by the neck to a pole.

A group of mainly white farmers stormed a court on Wednesday during the hearing of two Black suspects accused of killing the young farm manager.

They also denounced the murder of a 44-year-old farmer, strangled to death after being sexually assaulted.

The lead instigator of the rioters, Andre Pienaar, 52, was subsequently jailed and charged with terrorism on Friday.

The powerful Farmers Union, TLU, joined its voice to the protesters, criticizing the government for its “unwillingness or inability” to keep citizens safe from deadly attacks on farmers.

“South Africans are not safe at home, in the workplace, on vacation, in cities, in villages, in rural areas or on farms,” TLU President Henry Geldenhuys said. “Farmers are at the forefront of the war against crime in South Africa.”

“President Ramaphosa must step in and acknowledge that farmers are being murdered in South Africa. He must not tell the world that it doesn’t happen, because it does. I also want him to condemn these attacks very firmly so that this does not happen again, because if the government does not react, we will,” said Kallie Roux, one of the instigators of the protest.

Murders on farms are an explosive issue in South Africa, where some white minority activist groups promote the idea that they are victims of a “white genocide” that aims to force landowners to flee.

Roughly 70 per cent of privately owned farmland in South Africa is owned by whites, who make up less than 9 percent of the country’s population of 58 million.

The government is preparing to expropriate white-owned land without compensation, as part of an effort to redress economic inequalities that remain stark a quarter of a century after the end of apartheid.

South Africa has a high murder rate with the majority of victims being Black and poor. Between April 2019 and April 2020, police statistics show 21,325 murders, of which only 49 were white farmers.