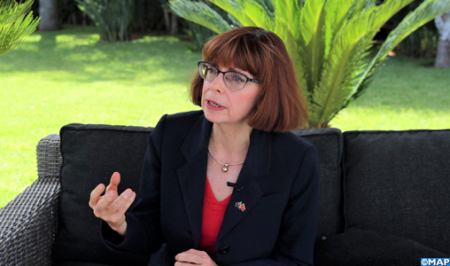 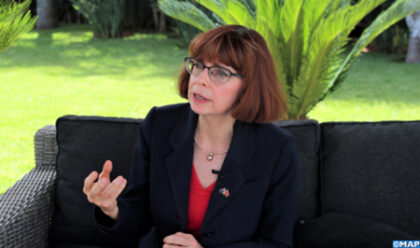 Australian ambassador to Morocco Berenice Owen-Jones has hailed Morocco’s role and leadership in Africa amid the health crisis due to the COVID-19 pandemic, commending the Kingdom for the medical aid it sent to fifteen African countries to help them in the fight against the coronavirus.

“Morocco has shown leadership and solidarity through providing massive medical aid to fifteen sub-Saharan countries. It is a pragmatic approach that takes into account the needs of these African countries and a strong signal of South-South cooperation under the leadership of King Mohammed VI,” she said in an interview with MAP.

The Australian diplomat also emphasized the importance of Morocco’s local responsiveness to tackle the coronavirus pandemic, and its efforts to overcome repercussions of the crisis, saying it is a “model” of responsiveness since the outbreak of the crisis.

“The financing of the pandemic management fund has been generous and without compromise and the Moroccan government has to come to the aid of poor households, employees, and also people operating in the informal sector.”

In March, King Mohammed VI ordered the creation of the fund, which collected more than MAD 33 billion ($3.6 billion).

The diplomat added that the crisis revealed the Moroccan industry’s capacity “to find pragmatic and innovative solutions.”

She said she was “very impressed” by the textile industries that mobilized efforts in time to manufacture millions of masks per day not only for Morocco but also for export.

In her interview, the diplomat also touched on cooperation between Morocco and Australia to stem the spread of the virus.

She said that Moroccan and Australian foreign ministers raised the topic during several telephone conversations.

Australia has made “major advances” in the fight against Covid-19, both in the preparation of a vaccine and in the understanding of the biological mechanism of the virus, she said, noting that Morocco and Australia could exchange experiences and expertise in this area.

The diplomat stated further that the Australian government recognizes Morocco’s importance as a regional hub between Europe and Africa. “This is why we opened an embassy in 2017.”

Owen-Jones also spoke about the importance of Morocco’s political and economic stability and its strategy to modernize infrastructures.

“I have seen for myself great changes in Morocco; I saw and had the pleasure of visiting world-class infrastructures,” the diplomat said, mentioning in this regard the county’s high-speed train, the Tanger-Med port, and the solar power plant in Ouarzazate.

North Africa Post's news desk is composed of journalists and editors, who are constantly working to provide new and accurate stories to NAP readers.
NEWER POSTSuccessful completion of perforation of Al Massira Dam, a première in Africa
OLDER POSTMorocco starts making its own intensive care beds