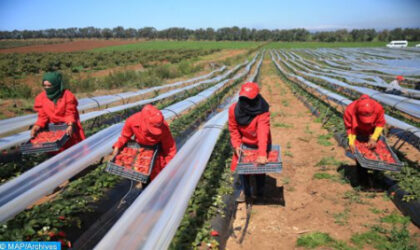 Moroccan seasonal workers in Huelva will be repatriated by sea as of Saturday, the embassy of Morocco in Madrid has announced in a release.

The repatriation plan, in collaboration with the Spanish government and the Autonomous Community of Andalusia, will be launched, as of Saturday July 18.
Some 7,100 seasonal Moroccan workers, who took part in the agricultural campaign in Huelva, as part of the circular migration program between the two countries, will thus be repatriated.

Meanwhile, Morocco’s flag carrier RAM started on Wednesday its special flights Program, after adapting it to the conditions imposed by the government in the framework of the authorization of air and sea travel between the Kingdom and the rest of the world under specific conditions.

The first flight flew, from Casablanca’s Mohammed V airport to Charles de Gaulle airport in Paris, members of the Moroccan community living abroad, foreigners residing in Morocco or foreign tourists who were stranded in the Kingdom, as well as Moroccan students enrolled in foreign universities and citizens who had to travel abroad for treatment, on exceptional authorization.

Director of soil operations at RAM, Abdelaziz Rayes, said that the air bridge launched by the national company and which will link Morocco to several countries, aims to allow members of the Moroccan community living abroad to return to the country to spend the annual vacation among their families.

The flights are operated in application of rigorous preventive measures to stem the spread of the Covid-19 pandemic, including the mandatory wearing of masks and physical distancing.

So far, 25 return flights have been scheduled, servicing in particular European, North African and African destinations.