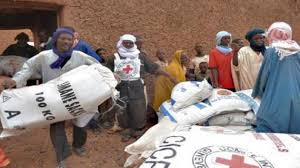 The issue of the diversion by Algeria and the Polisario of the European Union’s humanitarian aid destined to to the Tindouf camps populations has been officially referred to the European Parliament’s Committee on Development (DEVE) on Thursday.

At a hearing of the European Commissioner for Crisis Management, Janez Lenarcic, held at the European Parliament in Brussels, the DEVE Committee followed the address of MEP Dominique Bilde who denounced the continued diversion of European humanitarian aid by the polisario, with the complicity of Algeria and called for an investigation into this fraud.

“Part of the humanitarian aid would be resold to help purchase military equipment, such as tanks and missiles, to name but a few,” the French member of the “National Rally” said.

The MEP also alluded to the tactic used by the separatists to get more funding and more aid to divert, namely through deliberately inflating the numbers of refugees in the Tindouf camps.

She said in this connection that Algeria has always refused to carry out a census of the refugees despite repeated requests from the UN. Besides, Algiers would levy a 5% tax on the humanitarian aid, she said, deploring the fact that the populations held against their will in the Tindouf camps “are suffering the worst abuses” and that their situation is getting worse in view of the coronavirus crisis on which “the polisario maintains total omerta”.

The French MEP recalled that “this shady system has been documented since the [European Anti-Fraud Office] OLAF investigation was made public in 2015”, wondering “when will the European Commission have the courage to put an end to this scandal and finally put the Algerian state face to face with its responsibilities”.

The OLAF report covered a four-year investigation between 2003 and 2007, and documented a well-organized, years-long embezzlement by the Polisario Front of humanitarian aid designated for Sahrawi refugees in the Tindouf camps.

“This report clearly states that the Polisario leaders systematically and methodically adopt misappropriation of humanitarian aid and accumulate colossal fortunes, and they all have luxury real estate in Spain. It is tragic to be enriched on the back of the suffering of the sequestered populations,” as put by Bjorn Hultin, the vice president of Brussels-based NGO “European Committee for the Support of the Autonomy Plan in Western Sahara” in a recent statement to the European independent news outlet EUToday.

The London-based EUToday published Tuesday June 30 a long investigative article on the continuing embezzlement by Algeria and its puppet, the Polisario Front, of the humanitarian aid sent by the EU for the Tindouf camps populations.

New evidence has emerged to confirm that this large-scale mismanagement continues even in the context of the Covid-19 pandemic, stated the outlet.

Following the publishing of the EUToday’s article, another French member of the European Parliament, Nicolas Bay, slammed in a statement the EU’s inaction on the embezzlement by the Polisario and its mentor Algeria of the humanitarian aid.

He wondered why Brussels refuses to investigate these acts despite the accumulating evidence and why it continues to send nearly €10 million per year of equipment to a camp while it does not even know the real number of refugees.

This money is that of the taxpayer of European countries: it is time to demand accountability from Brussels and Algeria!” the French MEP underlined in his statement released on Wednesday.