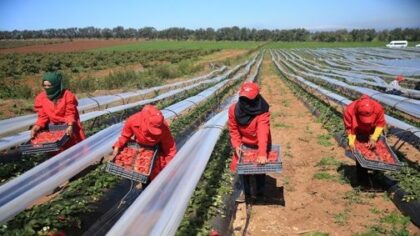 The UN Special Rapporteur on extreme poverty and human rights, Olivier De Schutter, has called on Spanish government and companies to protect the rights of Moroccan woman seasonal workers in strawberry farms.

He urged the Spanish authorities and agribusinesses to “immediately improve abysmal conditions for neglected migrant laborers” deployed as “essential workers” to pick strawberries during the COVID-19 pandemic while the rest of Spain was under lockdown.

According to Mr. De Schutter, all Spanish authorities are responsible for ensuring that migrant workers are guaranteed conditions, including access to adequate healthcare that meets international standards.

About 3,000 female migrants from Morocco travel each year to the Spanish city of Huelva during the annual strawberry harvest, where they often work in excess of Spain’s legal limit on working hours and are paid below minimum wage, or sometimes not paid at all.

“Governments tend to blame companies for violations of workers’ rights, and companies in turn tend to see the enforcement of labor rights as the duty of public authorities, not theirs,” De Schutter said.

“The complete dependence on seasonal migrant workers in the strawberry business of Huelva routinely leads to situations that amount to forced labor, in complete disregard both of international human rights standards and of domestic legislation,” De Schutter said.

Most of the migrants lack safety and protection measures at work and live in overcrowded housing settlements with inadequate access to basic services, including to water, soap and disinfectants – particularly alarming given the COVID-19 health risk.

“The protection of seasonal migrant workers in Huelva has been completely neglected during the COVID-19 pandemic. While the rest of Spain was under lockdown to stem the spread of the virus, thousands of migrant laborers considered ‘essential workers’ were put to work without even basic hygiene measures being taken, without protective materials and sharing tools,” De Schutter said.

“The relevant authorities were alerted but remained silent. And when workers fell sick, their access to healthcare was not guaranteed”, deplored the UN special rapporteur.

Eight NGOs, including the international organization Women’s Link Worldwide, had called on the United Nations to investigate the human rights violations suffered by the Moroccan migrant women who work in the strawberry and red fruit harvest in Huelva, Spain.

The women make up a large percentage of the seasonal workforce in Andalucía, employed under a seasonal worker visa scheme that has been operated by the Spanish and Moroccan governments since 2001.

Over the past few years, reports of widespread sexual and physical abuse and exploitation of Moroccan seasonal workers have surfaced in the local and international media.