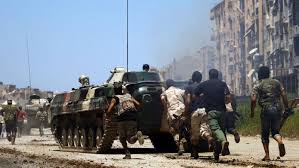 Sudan arrests over a hundred mercenaries heading to Libya

Sudanese authorities announced the arrest in the Darfur region of 122 mercenaries who were travelling to neighboring Libya to take part in the conflict.

According to several UN reports, hundreds or even thousands of Sudanese fight regularly in Libya, but this is the first time that Khartoum has officially announced arrests.

In a video broadcast by the official news agency Suna, dozens of young people are seen sitting on the ground surrounded by security forces. The images, which were filmed in the town of El Geneina, the capital of West Darfur state, on the border with Chad and Libya, show fighters who were preparing to reach the neighboring country, the Sudanese authorities said.

The Libyan Government of National Unity has repeatedly accused Sudanese parties of sending fighters to swell the ranks of the forces of its rival, Marshal Khalifa Haftar.

Although Sudanese authorities have consistently denied this, the accusation is supported by the United Nations, which in a report in December 2019 evidenced the presence of Sudanese fighters alongside both Khalifa Haftar and the GNA.

The participation of mercenaries in the Libyan conflict is not a new phenomenon. Lately Syrians were transported by Turkey to take part in the conflict, according to the Syrian Human Rights Observatory and Syrian opposition activists.

In another development, the UN mission in Libya reported that “Mines and improvised explosive devices planted in or near homes have caused more than 100 victims,” including civilians and mine disposal experts.

North Africa Post's news desk is composed of journalists and editors, who are constantly working to provide new and accurate stories to NAP readers.
NEWER POSTMorocco’s Tourism sector gets support from EBRD & UNWTO
OLDER POSTMorocco vs the covid-19