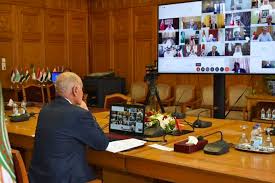 The Arab League Council has reaffirmed its full backing to the UN-brokered agreement signed by Libya’s warring factions in 2015 in the Moroccan coastal town of Skhirat, a peace deal which remains the basis for any solution to the Libyan conflict.

During its emergency meeting held Tuesday via videoconference with the participation of Moroccan Foreign Minister Nasser Bourita, the League stressed the importance of the role of all legitimate institutions emanating from this political deal which was supported by the Arab summit convened in Tunisia in 2019.

At the emergency meeting, held at Egypt’s request, the foreign ministers expressed their total rejection of any foreign interference that would facilitate the influx of foreign terrorist fighters into Libya, warning that the violation of UN arms embargo threatens the security of Libya’s neighbors and the region.

The foreign ministers warned against a “continuation of military action that alters existing front lines.” The warning came as a coalition of Turkish-backed forces based in the capital, Tripoli, pushed toward the key coastal city of Sirte.

A political solution engaging all Libyans is the only way to restore security & stability in the region and to combat terrorism, said the ministers voicing concerns over military escalation, which exacerbates the crisis in Libya and threatens the security and stability of the whole region, including the Mediterranean basin.

They also called on the UN and the international community to exert pressure on all foreign parties to flush out mercenaries from all Libyan lands, unify all military & security institutions in Libya and disarm all armed groups and militias.

During this videoconference meeting, Moroccan top diplomat called for the setting up of a small Arab group tasked with drawing up a strategic vision to contribute to the resolution of the Libyan conflict, stressing the need to listen to the different Libyan parties in order to bring their views closer.

Bourita wondered whether it is possible to skip over the Skhirat agreement without having an alternative which will be supported by all Libyan parties and by the international community.

Morocco remains attached to the preservation of the national unity and territorial integrity of Libya and rejects any division of this country, said the Foreign Minister, reiterating the Kingdom’s rejection of any foreign intervention in Libya and any non-Arab interference in the Arab region.