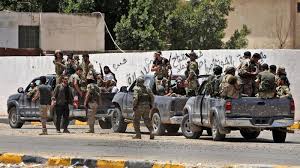 France, Tunisia, others call for resumption of Libya negotiations

Paris and Tunis on Monday asked the parties in Libya to fulfill their commitments to restart negotiations under the United Nations aegis.

“France and Tunisia together demand that the warring parties ceasefire and keep their commitment to resume negotiations within the United Nations framework to restore security for all, reunite Libyan institutions and start reconstruction for the benefit of all Libyans,” French President Emmanuel Macron said Monday.

During a joint news conference after meeting with visiting Tunisian President Kays Said at the Elysée Palace, Macron indicated that this is a difficult path that requires “everyone to show responsibility”, assuring that France and Tunisia are “together” calling for a cease-fire in Libya.

Macron criticized Turkey’s role in Libya, saying it threatened the interests of Libya, its neighbors, the entire region and also Europe.

“I consider today that Turkey is playing a dangerous game in Libya and contravenes all the commitments it made at the Berlin conference,” he told an audience of journalists, saying he had made the same remarks in a telephone conversation on Monday afternoon with US President Donald Trump.

In this connection, the White House said the two leaders agreed on the urgent need for a ceasefire in Libya and for the rapid resumption of negotiations by the Libyan parties.

Trump and Macron reiterated that military escalation on all sides must stop immediately to prevent the Libyan conflict from becoming even more dangerous and intractable.

Ankara supports the UN-recognized Government of National Accord (GNA) in the conflict opposing it to Khalifa Haftar, a renegade warlord backed by Paris, Abu Dhabi, Cairo and Moscow.

International calls for a ceasefire in Libya have been rising, especially after Egypt threatened last week to intervene militarily in Libya if the GNA forces attack the strategic city of Sirte.
Italy and Germany have also pushed Monday for a ceasefire and de-escalation of tensions in Libya following.

Italian Foreign Minister Luigi Di Maio and his German counterpart, Heiko Maas, said after talks in Rome that a ceasefire is urgent given the Egyptian threat. Di Maio also called for the quick naming of a new UN envoy and the strong enforcement of a UN arms embargo on Libya.

“If we stop the arrival of weapons, or strongly reduce them, we will be able to reduce the aggressiveness of the Libyan parties in this conflict,” Di Maio said.

After Egypt’s threat, the UN on its part said Monday the “last thing” Libya needs is more conflict on its territory.

“It is clear that the last thing Libya needs right now is more fighting, more military mobilization, more transfer of weapons, more presence of either foreign fighters or mercenaries on its soil,” said UN spokesman Stephane Dujarric during his daily press briefing.

“We’re alarmed by the continued military mobilization in central Libya, particularly in Sirte,” and by the “flagrant violations of the arms embargo,” Dujarric said.

He added it was “important for none of the parties to do anything that would make the situation worse.”