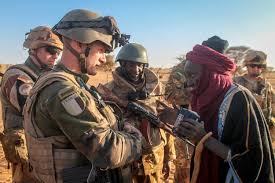 According to the Chadian military, the presidential guard fired because the unmarked vehicle was in a prohibited zone and because they did not know who the passengers were.

The French military described the incident as an “accident.” However, it is stated that the French soldiers were patrolling around the palace in preparation for an upcoming official meeting, without specifying at what level.

The vital prognosis of the two wounded soldiers is not yet known, but they will be repatriated.
An officer in Chad’s presidential guard said that the two “arrived in a white jeep. They were in civilian clothes and stopped in front of the main gate of the new palace and therefore the soldiers on guard fired on them. Then another car came and got them.”

Chad, whose president Idriss Deby has been in power for three decades, is an ally of France and its military is seen as one of the most effective in the region.

Chadian military is a key part of the 5,000-man G5 Sahel force, alongside Burkina Faso, Niger, Mali and Mauritania, co-operating with France’s Barkhane force deployed in the Sahel to combat a growing Islamist insurgency.

The Chadian military also participates in the Multinational Joint Force (FMM), which since 2015 has been fighting Boko Haram, now very established in the Lake Chad basin on the border with Niger and Cameroon.

Newer PostCOVID-19: State of health emergency extended for another month in Morocco to July 10
Older PostCOVID-19: Morocco exported nearly 18.5 million facemasks to 11 countries around the world