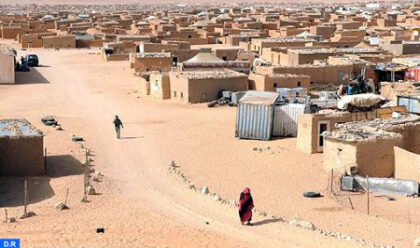 Spain’s justice system has inflicted a new blow to the Polisario separatist front by prohibiting the display of its pennant in public buildings.

The Spanish Supreme Court, the country’s highest judicial body, has vetoed the use, occasional or permanent, of “unofficial” flags or any political expression inside and outside public buildings.

The court’s decision constitutes a new setback for the polisario, which is losing more and more ground in Spain.

According to the text, the use of flags, ensigns, emblems or unofficial symbols, like that of the Polisario separatists, in buildings and public areas is not “compatible with the current constitutional and legal framework” nor with the “duty of objectivity and neutrality” of Spanish administrations.

Whether occasionally or permanently, the flag of the Polisario must not coexist “with the flag of Spain and other flags, which are legally or statutorily established”, underlined the judgment of the Supreme Court, putting an end to one of the most strange anomalies in a democratic country like Spain.

This scathing setback for the Polisario in Spain comes a few days after the masterful snub suffered by the separatists at the end of May on the occasion of Africa Day.

Actually, the Spanish Foreign Minister Arancha González Laya had on the celebration of Africa Day published on the Twitter account of her department a map of Africa with the flags of all the official member states of the African Union with the exception of the pseudo-SADR, self-proclaimed by the Algeria-backed Polisario.

The Spanish stand is in line with the guidelines and state policy adopted by the Spanish government on the Sahara issue. This state policy, which does not change with governments, was underlined by the Head of Spanish Govt Pedro Sanchez in his speech before the UN General Assembly last September.

Addressing the UN General Assembly, Pedro Sanchez defended the centrality of the UN role in the process of political settlement of the issue of the Moroccan Sahara saying “the Spanish government supports the efforts of the UN Secretary General seeking to achieve a political, just, lasting and mutually acceptable solution” to the Sahara conflict. He did not make any reference to the Polisario or to its self-determination referendum thesis.

Spanish Foreign Minister Arancha González has repeatedly affirmed that Madrid does not recognize the self-proclaimed separatist “SADR” and that its stand on the Sahara remains unchanged because “it is a State policy”.