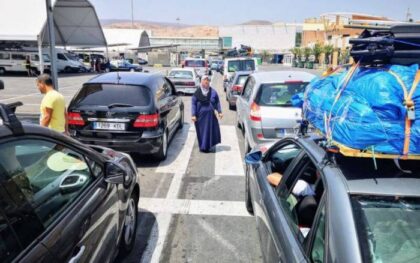 Every year, thousands of Moroccans, Algerians… living in Europe used to cross Spain on their way to their countries of origin to spend their summer holidays. But this year, this annual transit operation will not start in June as usual due to coronavirus.

The announcement was made lately by the Spanish Interior Minister Fernando Grande-Marlaska.

“The crossing of Spain by millions of Moroccan and Algerian travelers will not take place in June in order to preserve the health of citizens against the Coronavirus pandemic”, the Spanish Interior Minister was quoted by media as saying.

Madrid, Rabat and Algiers will set out together safety guidelines for the protection of travelers and workers deployed to coordinate this annual transit operation, added Mr. Fernando.

He also affirmed that contacts are underway with other host countries including France, Belgium and the Netherlands, while a joint Spanish-Moroccan committee is expected to hold a meeting to discuss arrangements for this complex operation that requires huge logistic resources.

More than 750,000 vehicles cross Spain between June and October during the summer transit operation. In 2019, over 2.6 Million Moroccan expatriates spent their holidays in their homeland. Most of them make the trip by car.
In Morocco, no dates have so far been set for the 2020 transit operation “Marhaba”.

Yet, according to Moroccan l’Economiste Daily, the “Marhaba” transition operation 2020 will start probably in July with the scheduled opening of Spanish borders to international tourists next month with enhanced health safety rules.