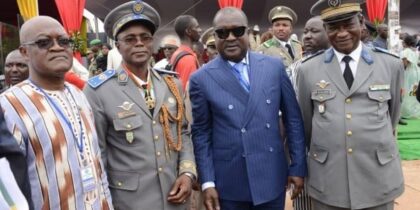 Burkinabe former Minister of Defense, Jean-Claude Bouda, was arrested on Tuesday, May 26. He is charged in particular with “money laundering” and “illicit enrichment”.

Jean-Claude Bouda, close to Roch Marc Christian Kaboré, appeared before court for a hearing following a complaint by the National Anti-Corruption Network.

Minister of Youth (2016-2017) and then of Defense (2017-2018) of President Roch Marc Christian Kaboré, Jean-Claude Bouda was “charged with forgery and use of forgery, money laundering, illicit enrichment and misdemeanor, appearance. He was placed under arrest warrant, Tuesday,” according to a judicial source.

The “appearance offense” means that a person is living beyond the means that can be justified.

The case started in December 2018 when pictures of a luxurious villa reportedly belonging to the former Minister of Defense went viral around the Web.

A few months later, the national anti-corruption network filed a complaint for offences of appearance, illicit enrichment, false declarations of interests and assets, among others.

The network explained that the acquisition of this real estate heritage, the cost of which was estimated at nearly half a billion CFA francs, was not mentioned anywhere in the declaration of assets of the former minister when he was appointed to the government. “And the resources that he had declared could not allow him to make such an acquisition either,” the network maintained.

After the court hearing, former minister Jean-Claude Bouda was
directly transferred to the Ouagadougou prison.