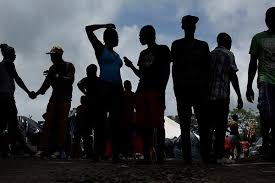 Moroccan Police of the Saharan city of Dakhla on Monday arrested 25 African nationals who were intending to illegally migrate to overseas.

The clandestine migrants were nabbed on the beach of the city before boarding a makeshift boat, says a press release issued by the national police.

They were caught red-handed with two rowboat motors and nine barrels containing 540 liters of fuel.

An investigation was opened to identify, arrest and bring to justice all those involved in this migrants’ smuggling operation.

On May 19, the Royal Navy had arrested twenty-five Sub-Saharan would-be illegal immigrants and a Moroccan at the fishing village ‘Lassarga’, south of the city of Dakhla.

These individuals, who were planning to reach the Canary Islands, were arrested aboard a small fishing boat.

They were transferred to Dakhla’s reception center as part of the measures provided for by the state in the context of the health emergency.

Morocco, which provides assistance to victims of illegal migration, had rescued at sea 19,554 illegal migrants in 2019.

Morocco’s efforts in combating illegal migration networks have been praised by the EU border agency, the IOM, the European Union and Spain.