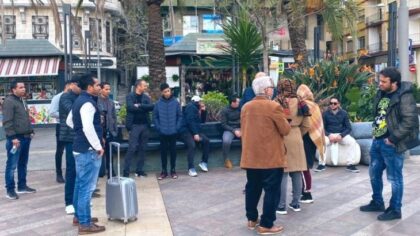 The number of Moroccan nationals stranded abroad rose to 31,800 people who are still waiting for a governmental decision to be repatriated to the homeland, head of the government Saad Eddine El Othmani said, promising their return without giving a specific date.

He spoke vaguely about ministerial departments preparing for their return at a time Morocco’s social media is awash with complaints and distress expressed by thousands of Moroccans trapped abroad after Morocco banned passenger flights and closed its borders due to coronavirus.

“We are aware of this thorny issue. Elected officials and senior employees as well as some of my family members are in this situation,” he said.

A roadmap has been drawn by all relevant ministerial departments with regard to their return and the venues of their quarantine, he added.

Foreign Minister Nasser Bourita has briefed MPs last week of the measures taken by embassies and consulates across the globe to accommodate and help vulnerable Moroccans but he said that their return needs the green light of the health ministry.

A first phase of the repatriation of hundreds of Moroccans stranded in the occupied enclaves of Melilla and Ceuta started last week. The repatriated citizens were afterwards taken for quarantine in the north-eastern Saadia resort.

The number of the Moroccans stuck abroad is expected to increase as summer approaches due to the end of the school year. In France alone, Morocco has 40,000 students.