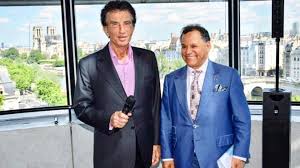 The National Foundation of Museums of Morocco (FNM), chaired by Mehdi Qotbi, has earmarked 6 million dirhams to help visual arts artists who have been impacted by the Covid-19 pandemic.

This aid is part of the FNM missions and will mainly concern artists facing difficulties, Mehdi Qotbi told le360 news outlet. The aid will consist in acquisition of works of art by the FNM. An independent commission will be responsible for selecting the artists and works, he said.

Le360 also reported that museums under the aegis of the FNM will prioritize Moroccan art, artists and heritage in their future events programming.
The FNM’s assistance to Moroccan artists coincides with a letter from the President of the Paris-based Institute of the Arab World, Jack Lang, to Mehdi Qotbi, the news outlet noted.

In this letter, Jack Lang suggests a French-Moroccan reflection on a new arts policy, which could serve as a lever in times of economic crisis.

“The crisis is brutally affecting the artistic life of our countries,” Jack Lang deplored.

“Yet, we must not resign ourselves to this situation. On the contrary, we must fight to prepare for a new start. Even better, this tragedy can be an opportunity to reinvent art policy,” said the IMA president and former Minister of Culture. A common vision can be “a historic opportunity to be seized to achieve a real new cultural deal,” he said.

To illustrate his proposal and lay the foundations for this strategy, Jack Lang takes the Roosevelt revolution of 1929 as an example.

In the midst of the 1929 economic crisis, the American president had unexpectedly bet on art, giving it a special place in the revival of the economy. A first in the history of the country.

“For this purpose, he had created the Works Progress Administration, entrusted it to a man of great culture, Harry Hopkins, and surrounded him with a brilliant team,” said Jack Lang.

“The imagined program was founded on the certainty that the arts could have a leverage effect in times of crisis not only on the creation of mass jobs, but also by encouraging a vast movement of popular education to give hope to the Americans,” Jack Lang explained further.

More concretely, this new program enabled the hiring in just a few months of tens of thousands of artists: writers, painters, sculptors, and musicians. The project also led to the creation of several institutions, namely “the Federal dance project” and the “Federal theater project”, which were deployed throughout the territory, in addition to five large regional theaters that recruited nearly 13,000 actors.

This period of vigorous creativity will give birth to the greatest artists in modern American history, Jack Lang recalled, deeming that with this historical precedent in mind, the moment has maybe come to invent a new cultural model.

Morocco, architect of a new vision

To those who may wonder why Morocco and what would be the role of the Kingdom in this new cultural strategy, Jack Lang gave the answer in his letter, saying that King Mohammed VI’s Morocco has great ambitions, notably in the promotion of arts and culture. This is a fact, he said.

“H.M. King Mohammed VI has shown his attachment to art and culture since his accession to the throne. Morocco has taken an immense place in international cultural and artistic life,” writes the former French Minister of Culture.

Pointing out that Morocco could pave the way for this new vision, he expressed wish to see France and Morocco working closely on “this beautiful project, hand in hand.”

In addition to Morocco’s cultural policy, which commands admiration in France and elsewhere, Jack Lang also hailed the exceptional management of the COVID-19 health crisis demonstrated by the Kingdom.

Jack Lang, in the preamble to his letter to Mehdi Qotbi, expressed his admiration in a short sentence. “First of all, a word to tell you: Bravo Morocco”.

“We admire in France the remarkable action carried out under the authority and the impetus of H.M. King Mohammed VI to overcome the epidemic”, he stated, mentioning as an example the problem of protection masks, which has, he said, “poisoned French political life for some time.”

“We are impressed by Morocco’s determination to ensure their mass production,” he stated, noting that nothing is difficult for those who want it.
The six million dirhams earmarked by the National Foundation of Museums of Morocco will go first to artists currently facing difficulties, so that they can continue to create and have a little lifebuoy in these terrible times.

However, as suggested by Jack Lang in his letter, reflection should focus on a larger, more important dimension as societies cannot do without artists and creators.