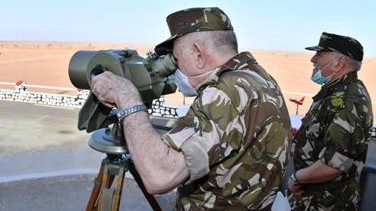 Algeria’s warmonger leadership launched live fire military exercises near Morocco’s Sahara borders in a move that adds to a series of provocations showing the inherent hostility of the Algerian regime to Morocco.

At a time the country’s finances are hit by the fall in oil prices amid the coronavirus outbreak, the Algerian army has geared focus to the area where it hosts the Polisario separatists, conducting offensive war games, which analyst say, shows Algeria’s obsession with its Western neighbor.

Led by General Said Chengriha who once called Morocco “the enemy,” the Algerian army used attack helicopters, rocket launchers and tanks in addition to different types of cannons.

Chengriha who has fostered his stronghold by getting rid of all generals who could oppose his moves has been defeated by the Moroccan armed forces and his forces captured in the Amgala incursion conducted by the Algerian army in support of the Polisario militias in the 1970s.

Algeria surrounded by armed conflicts in Mali and Libya on its southern and eastern borders chose the safest and most stable border to conduct its provocative war games near the rear base of the Polisario militias in a message that can only be interpreted as Algeria’s preparedness to fight Polisario’s separatist war which it has funded and backed for decades.

The drills also show the panic within the military regime amid bleak prospects for the state finances and lingering popular dissent that came to a halt only after the coronavirus outbreak, but also the growing discontent and opposition to the Polisario leadership within the Tindouf camps.

Never has the Algerian military and civilian leadership been so blunt in their hostility to Morocco. The series of attacks have been launched by the President himself who said Algeria will not resort to foreign debt in order to maintain its steady anti-Moroccan stance as far as the Sahara issue is concerned.

Other major historical events that validate the anti-Moroccan doctrine within the Algerian regime date back to 1972. When former president Boumediene was in Rabat to sign a border demarcation treaty, Algeria was training leftist Moroccans in military bases to overthrow the regime in Morocco. They will go down in history later as the events of 1973, where leftists, armed by Algeria, attempted a failed armed uprising in Morocco.

The sacking in humiliating conditions of over 350,000 Moroccans and the confiscation of their property in Algeria in response to Morocco’s green march to recover its southern provinces and the continued military and diplomatic support for separatism while blocking any effort towards a political solution to the Sahara issue are other stark cases of the endemic anti-Moroccan sentiment within the ruling elites in Algeria.

As long as Algeria keeps its doctrine based on anti-Moroccan interests, relations may further worsen leading Morocco to an arms race to maintain balance of power in the region and deter any attack by Algeria’s pawns: the Polisario.

As Morocco keeps an outstretched hands policy towards Algeria, urging the neighboring country to start a new chapter of regional integration, such calls have regrettably fell on deaf ears in Algeria, bogged down in a cold-war mentality giving way to an expensive arms race.

The two Maghreb countries were ranked by the Stockholm International Peace Research Institute (SIPRI) as Africa’s largest arm buyers taking 26% and 30% respectively of total arms sales on the continent.

Last November, the US State department cleared the sale of 36 AH-64E Apache attack helicopters and related equipment for an estimated cost of $4.25 billion.

These deals came in response to Algeria’s order of 14 jets of each of Russian-made Sukhoi Su-34 and Sukhoi Su-57. Yet, Algeria’s hopes to acquire the Russian fighter jets are shrouded in uncertainty following the death of all-powerful general Gaid Salah.

The recent deals show that Algeria remains bogged down in a military doctrine typical of a soviet era emphasizing ground troops while Morocco focused more on qualitative air capabilities.

A salient point of superiority for Morocco are the two spy and reconnaissance satellites that can be used for both civilian and military purposes.

Besides aircrafts, the recent acquisition by Morocco of Abram tanks, tow missile launchers as well as interest to purchase Patriot Air Defense Systems, show that the Royal Armed Forces remain consistent in their efforts to modernize weaponry.

Morocco’s recent US purchases would significantly tip the balance in the regional arms race with Algeria.

But weapons alone do not make the difference without proper training. Morocco has convened regularly sea, land and air exercised including Africa’s largest military games held annually together with the US and other armies.

Algeria, on the other hand, has been hostage to a military doctrine that prohibits foreign intervention and has refrained from participating in multinational military drills of the scale of the African Lion.

Morocco “consistently imports advanced arms and ammunitions such as fighter and training aircraft, ships, missiles, tanks and frigates to strengthen its armed forces; a trend expected to continue over the forecast period,” reads the report dubbed The Future of the Moroccan Defense Industry- Market Attractiveness, Competitive landscape and Forecasts to 2022.