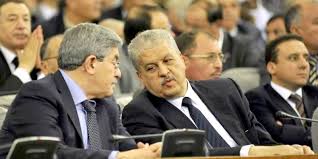 Ahmed Ouyahia and Abdelmalek Sellal were sentenced respectively to 15 and 12 years in prison last December after they were charged with misappropriation of public funds, abuse of power and granting undue privileges.

Both were Prime Ministers under former autocratic leader Abdelaziz Bouteflika who was forced to step down in April last year following popular uprising demanding an overhaul of his regime.

The two former Prime Ministers are named in corruption affairs in connection with the car assembly industry in the gas-rich African country and illegal financing of Bouteflika’s controversial election campaign for a fifth term in office despite his health condition.

Several figures in Bouteflika’s entourage have been detained and jailed.

On Tuesday, Karim Tabbou, a leading figure in the popular uprising in Algeria, also known as Hirak, was sentenced to one year in prison in a trial denounced by his defense lawyers and human rights watchdogs.

The European parliament also condemned the “judicial harassment” of the human rights activist.

In a joint statement, the chair of the human rights subcommittee, Maria Arena and the chair of the European Parliament delegation for relations with the Maghreb countries, Andrea Cozzolino believe that the conviction of Karim Tabbou in appeal in the absence of his lawyers, goes against his right to a fair trial, as supposedly guaranteed by Algerian law as well as by international conventions ratified by Algeria.

The two presidents of these bodies of the European Parliament consider that “the judicial harassment of which Karim Tabbou is a victim is incomprehensible and contrary to the rule of law”.