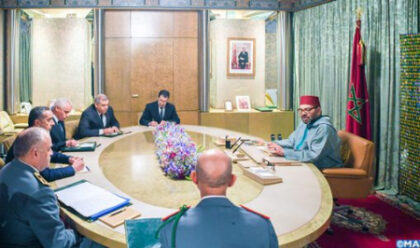 King Mohammed VI chaired, on Tuesday in Casablanca, a meeting focusing on the country’s management of the Coronavirus pandemic and on the actions to be taken according to the evolution of the situation.

The meeting is part of the continuous follow-up by the Moroccan Sovereign of the evolution of this pandemic, from the beginning of its outbreak in the world and after the first cases were reported in the Kingdom, said a statement issued by the Royal Office.

During the meeting, the King was informed by the Minister of Health about latest developments on Covid-19 coronavirus in the country, hospitals capacity in the different regions of the Kingdom and the measures taken to meet healthcare needs, including disinfection products and medicines.

“On the basis of the data presented by the Health Minister, and given the concern of HM the King to raise the capacities of the national health system to face this pandemic, the Sovereign, Supreme Commander and Chief of General Staff of the Royal Armed Forces (FAR), gave his high instructions to the Inspector General of the FAR, to put the equipped health facilities, whose creation had been ordered beforehand by the Sovereign in the various regions of the Kingdom for this purpose, at the disposal of the health system with all its components, if necessary”, said the Royal Office statement.

The move is part of the royal proactive approach adopted since the outbreak of this pandemic and the preventive measures seeking to contain its spread and to alleviate its negative economic and social impacts, added the statement.

This meeting was an opportunity to review the preventive actions taken, including the closure of Moroccan air and maritime space to travelers, the cancellation of sports, cultural and artistic events, the creation of a fund for the Coronavirus pandemic management, the suspension of courses in schools and universities, the temporary closure of mosques, the suspension of the hearings in the various courts of the Kingdom, in addition to a series of measures taken by the competent authorities in the field of public transport and the closure of unnecessary public areas.

On this occasion, the Monarch called on the authorities to ensure the supply of local markets, with food, cleaning and antibacterial products, on a regular and permanent basis, and fight all forms of speculation and price spikes.