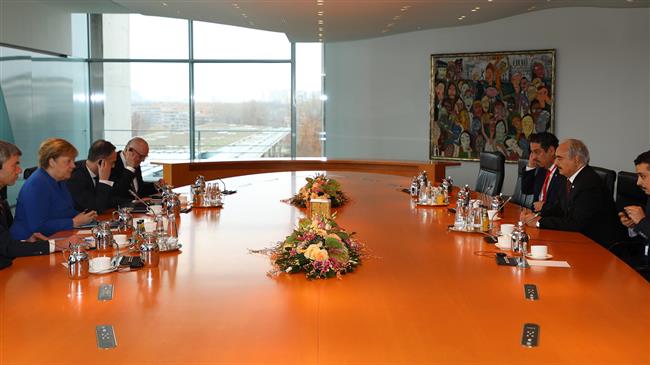 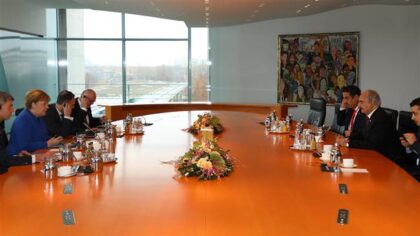 German Chancellor Angela Merkel Tuesday stressed at a meeting with Libyan rebel commander Khalifa Haftar that there is “no military solution” to the Libyan crisis that has become complex following the retired General’s ongoing military offensive to topple UN-backed Government of National Accord (GNA).

During the meeting in Berlin, the German Chancellor stressed that there can be no military solution to the conflict and that “a ceasefire and progress in the political process, in line with the decisions of the Berlin conference, are necessary”.

Earlier press reports had indicated that Khalifa Haftar was going to hand over to Chancellor Angela Merkel a file on the Syrian mercenaries sent by Ankara to Tripoli.

There are already some 5,000 mercenaries in Libya currently fighting for the benefit of the GNA of Fayez El-Serraj. Meanwhile, Syrian pro-government militias are engaged in the ranks of Haftar’s troops, as are the Chadian Djandjaouis and certain Russian military advisers.

Before going to Berlin, Khalifa Haftar was on Monday in Paris at the invitation of the French president Emmanuel Macron. At the end of the meeting between the two men, the Elysée said in a press release that Khalifa Haftar “undertook to sign the ceasefire document, but that this commitment would no longer hold if the militias do not respect it”.

The ceasefire, drawn up under the aegis of the United Nations, was unfortunately not signed either in Moscow or in Berlin, nor in Geneva.

Actually, the two main protagonists had both left the negotiating table in Geneva, leading to the resignation of Ghassan Salamé, the envoy of the secretary general of the United Nations in Libya.

French sources said Paris has convinced Haftar to sign the ceasefire agreement with the GNA of Fayez El-Serraj. He nevertheless sets his conditions.

If Khalifa Haftar keeps his promise, it will be a great victory for French diplomacy and Emmanuel Macron, confirming France’s role as the Godfather to the head of the Libyan National Army, the soures said.

According to Radio France Internationale, “little information leaked out of the meeting between President Macron and Haftar, but if a source is to be believed at the Élysée, Paris will not receive this time Fayez el-Serraj, the rival of Khalifa Haftar.”

However, the Interior Minister of the GNA, Fathi Bachagha, would be received in France on March 17, RFI said.

Multiple UN and International efforts to snatch a concrete ceasefire agreement between the GNA and Haftar have so far failed.