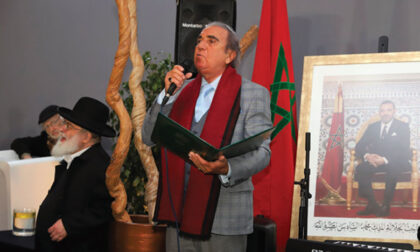 Several hundred members of the Moroccan Jewish community gathered last week at the Israelite cemetery in Rabat, to celebrate the Hiloula of Rabbi Eliezer Davila.

This annual religious meeting celebrates the venerated Saint Rabbi Eliezer Davila, who was born in 1714 in salé, Rabat’s twin city, and who died in 1761. He was buried in the Jewish cemetery of Rabat.

Besides the strong, overwhelming emotions, this annual commemoration is for the Moroccan Jewish community a time to express pride and a chance to connect to their origins. It is also an opportunity to celebrate the peace, tolerance, and peaceful coexistence prevailing in the Kingdom.

Speaking during the ceremony, vice-president of the Israeli community of Rabat-Salé, Henri Abikzer, said this annual spiritual celebration brings together hundreds of Jewish pilgrims from Morocco and abroad who gather to reaffirm their belonging to Morocco.

The participants in the ceremony chanted religious songs and expressed their attachment to Rabbi Eliezer Davila’s Moroccan spirit and their own unwavering attachment to Morocco and to the Alaouite Throne. They praised King Mohammed VI for his high solicitude towards the members of the Jewish community and raised prayers for the rest of the soul of the late kings Mohammed V and Hassan II.

During this religious ceremony, rogatory prayers were performed to implore the Almighty to ward off the drought in Morocco.

The ceremony was also marked by the performance of patriotic and popular Judeo-Moroccan songs.

In Morocco, the name Davila (or De Avila) appeared in Meknes in the 18th century with Eliezer father Samuel De Avila, who later on settled in Salé, Rabat’s twin city.

Eliezer Davila was a chief rabbi of Rabat, Marrakech and Salé and is said to be the author of several books, including a collection of legal decisions, a collection of sermons and the «Milhémet Mitzvah» book, on Jewish prescriptions, customs and traditions. He was a prolific scholar and many of his works were posthumously published by his son-in-law.

«Rabbi Eliezer founded a yeshiva in Rabat, which he led for the wise men who came from all over the region to thoroughly study Torah. All he wanted was to find new interpretations (…) with his students», the Hevrat Pinto platform recalled.

When Rabbi Eliezer died in 1761, he left behind his works, but also several legends about his life. In «Once upon a time in Morocco», David Bensoussan says that Rabbi Eliezer Davila «would have caused the waves of the ocean to overturn during the Lisbon tidal wave of 1755 by planting his stick in the sea».

The same legend was mentioned by author Issachar Ben-Ami in «Saint Veneration among the Jews in Morocco» (Wayne State University Press, 1998).
Rabbi Eliezer’s legacy will continue after his death and his son Mosheh became chief rabbi of Meknes then Rabat. The Rabbi’s hiloula is celebrated on the third of Adar, the day of his death from a heart attack.

The Hiloula of several Jewish saints is celebrated across Morocco by the Moroccan Jewish community. The main purpose of this religious event is to pray for a good life and the resolution of problems. The Jewish community lights candles, and raises prays at the tomb of the saint.

Thousands of Jews of Moroccan descent visit the country every year to rediscover the land of their ancestors, celebrate religious events or make pilgrimages to Jewish Saints’ shrines.

The Jewish community has been present in Morocco since antiquity and grew over the centuries, particularly with the arrival of Jews expelled from Spain by the Catholic kings after 1492.

The Atlantic city of Essaouira houses a memorial to Morocco’s Judeo-Islamic heritage, Bayt Dakira, and Casablanca hosts, since 1997, a Moroccan Jewish Museum, the only one of its kind in the Arab world, while a museum dedicated to the Jewish memory is under construction in Fez, the country’s spiritual capital.

Also, a number of cemeteries, synagogues and historic Jewish quarters were or are being restored.