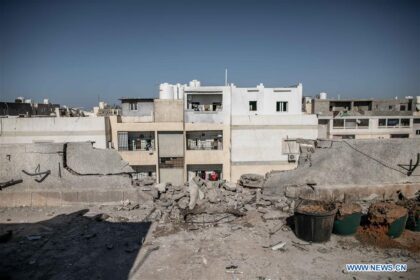 UN Special Representative for Libya Ghassan Salamé said Friday the escalation in violence over the last 24 hours in the country was “unacceptable” and warned that that the war in Libya could turn into a regional war on the Libyan territory due to the direct and indirect involvement of non-Libyan parties in the fighting.

Speaking to reporters in Geneva, Salamé warned that the truce agreed by the parties last month was under threat, adding that shelling hit many areas in and around the capital Tripoli.

He said five members of the same family were killed Thursday in the shelling and the international airport in Tripoli was hit Friday morning with several shells leading to the destruction of important parts of the airport.

He said shelling public facilities “is an extremely dangerous thing which is not accepted under international humanitarian law.” “There are dangers that the war in Libya could turn into a regional war on the Libyan territory due to the direct and indirect involvement of non-Libyan parties in the fighting.”

Salamé said the UN mission in Libya (UNSMIL) was moving forward on the three-track approach it has taken in applying the conclusions of the Berlin Conference. He said the economic track was going well, and on the military track, a document was sent back for discussion with leaders. As for the political track, Salamé said the UN team was surprised – after everything was agreed for a meeting on February 26 – that some were asked to leave, and others put last minute conditions that were impossible to meet. He said, still those who stayed decided that the opportunity was too rare to miss, and this resulted in three days of fruitful discussions.

Meanwhile, many Libyans from both sides of the conflict are angry at the UN, saying that it has not done enough to help.