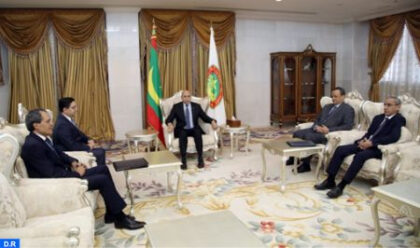 Morocco and Mauritania are eager to re-activate the spirit of the agreement of fraternity and neighborliness they signed in 1970.

This eagerness was stressed at the talks Moroccan Foreign Minister held Wednesday in Nouakchott with the Mauritanian President, Mohamed Ould Cheikh El Ghazouani, as well as with the Prime Minister Ismail Bedde Cheikh Sidiya, and Minister of Foreign Affairs Ismail Ould Cheikh Ahmed.

Bourita conveyed to the Mauritanian Head of State the greetings and consideration of King Mohammed VI as well as the Monarch’s firm will to upgrade relations between the two countries, which are commemorating this year the 50th anniversary of the fraternity and neighborliness agreement.

During the audience, the Mauritanian President expounded his analysis of the situation in the region and his vision as to the future of bilateral ties, affirming that the coming few days “will be very positive for bilateral relations.”

For King Mohammed VI, Morocco’s relations with Mauritania are not ordinary links. These relations are exceptional owing to their history, human depth, geographical proximity and common destiny, Bourita said, adding that this requires pooling efforts to take up challenges together.

The Foreign Minister stressed the need to take advantage of this favorable context to activate the spirit of this agreement and seize all the existing opportunities to raise the level of bilateral ties to a strong, strategic partnership, a genuine win-win partnership that benefits the two countries and peoples.

The Mauritanian top diplomat Ismail Ould Cheikh Ahmed also commended relations between the two countries as unique and longstanding, stressing that these relations are expected to develop further in the future.