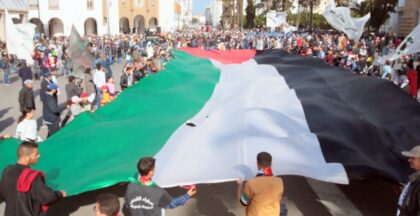 Thousands marched in solidarity with Palestinians and their rights to an independent state while denouncing the US Middle East peace plan, known as the deal of the century.

The protesters, including representatives of different political parties, rights groups and labor unions, hoisted Palestinian flags and chanted slogans against the US proposal.

The protesters expressed their determination to continue to support the Palestinian cause, rejecting all maneuvers against the Palestinians’ rights to an independent state with East Jerusalem as its capital.

Demonstrators also carried banners with slogans emphasizing that Jerusalem is and will remain the capital of Palestine.

The march came a couple of days after head of the government reiterated, in a statement to the Moroccan news agency, Morocco’s steady position in support of Palestine with Al Quds as its capital.

When the US president unveiled his peace plan, the Moroccan foreign ministry expressed appreciation for the efforts of Donald Trump to end the conflict, while stressing that it needs to be accepted by all parties in line with the two-state solution.

The Ministry also emphasized that Morocco’s traditional position on the Palestinian issue will remain unchanged.

Foreign media reported recently that Israel had interceded with the US to open a consulate in Morocco’s Sahara in return for Morocco’s re-establishment of ties with Israel.

There was no confirmation of the reports by Moroccan, US, or Israeli authorities.