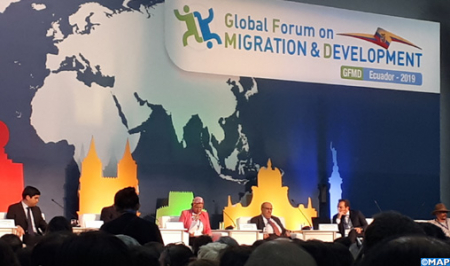 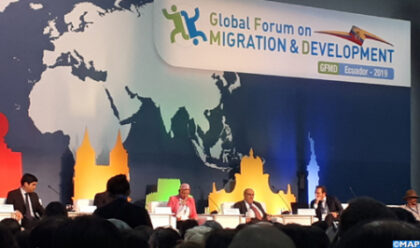 Morocco, a member of the GFMD troika took part in the 12th Global Forum on Migration and Development (GFMD) held in the Ecuadorian capital Quito Jan. 21 to 23, along 1,500 delegates from some 150 countries.

She explained that over the past two decades, Morocco had moved from being a transit country to a host country for migrants, a situation that prompted the authorities to adopt in 2013, at the initiative of King Mohammed VI, a new national immigration and asylum policy. This new policy sought to improve migrants’ living conditions, according to a humane and integrated approach that protects their rights and preserves their dignity.

Under this new migration policy, Morocco made a wide range of decisions, including the regularization of the situation of undocumented migrants, activating the process of their integration, and giving them access to all national mechanisms for education, health, legal protection, social and humanitarian assistance, vocational training and employment, explained the Moroccan official.

She recalled that King Mohammed VI was designated as “the Leader in charge of the migration issue within the African Union”. The Kingdom then took the lead on the African continent on the issue of migration, and the Monarch presented the African Agenda for Migration at the 30th Summit of the African Union in Addis Ababa, in 2018. The agenda is aimed at making migration “a lever for co-development, a pillar of South-South cooperation and a vector of solidarity”.

Morocco, which hosts about 10,000 Refugees and which is earnestly committed to migration issues, hosted in December 2018 the Global Compact for Safe, Orderly and Regular Migration.

The kingdom is also host to the headquarters of the African Migration Observatory, set up at the proposal of the King, in his capacity as the AU leader on the issue of migration.

The African Migration Observatory’s work is based on the triptych “understanding, anticipating and acting”. It is tasked with collecting information, promoting exchange of data and facilitating coordination between African countries on migration issues.

Several countries and pundits have lauded Morocco’s migration policy, saying that there are plenty of lessons to be learnt from the way a country like Morocco handles this challenge.

The 12th Global Forum on Migration and Development (GFMD) focused on the central theme of “Sustainable approaches to human mobility: Upholding rights, strengthening state agency, and advancing development through partnerships and collective action.”

It reviewed the implementation of migration-related commitments in the 2030 Sustainable Development Agenda through the High-level Political Forum, and the enhancement of the GFMD process through the follow up of the recommendations of the GFMD Ten-Year Review Report.

Created in 2007, theGFMD is a state-led, informal and non-binding process, which helps shape the global debate on migration and development.

The GFMD process allows governments – in partnership with civil society, the private sector, the UN system, and other relevant stakeholders – to analyze and discuss sensitive issues, create consensus, pose innovative solutions, and share policy and practices.

North Africa Post's news desk is composed of journalists and editors, who are constantly working to provide new and accurate stories to NAP readers.
NEWER POSTMorocco Hosts about 10,000 Refugees & Asylees
OLDER POSTRisk of Coronavirus in Morocco is “Low” – Health Ministry