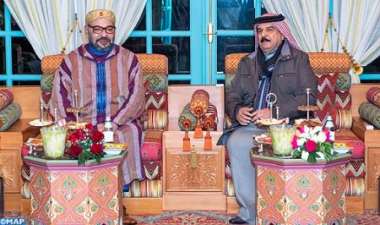 King of Morocco, King of Bahrain Hold Talks in Rabat

King Hamad is on a private visit to Morocco, reports MAP, without disclosing the contents of talks.

He told reporters after the meeting that Bahrain “highly appreciates the historic role” of Morocco in the preservation of peace and stability in Africa.”

Morocco’s appreciable role has enabled some States to be spared from terrorism and anarchy, the Bahraini official said.

He recalled that Morocco was the first country to welcome the various Libyan parties, stressing that the Skhirat agreement should remain the basis for a solution to the Libyan crisis.

The Bahraini minister stressed that the meeting with Bourita was an opportunity to highlight the convergence of views of the two Kingdoms and their rulers on a number of issues and challenges in the region.

The same day, the Bahraini Foreign Ministry issued a statement reiterating Bahrain’s support to Morocco’s legitimate rights over its southern provinces, and rejection of any attack on its sovereignty, its unity and its territorial integrity.

Bahrain welcomes the constant efforts of the UN Secretary-General, Antonio Guterres, to find a lasting solution to the Moroccan Sahara issue, the statement said.