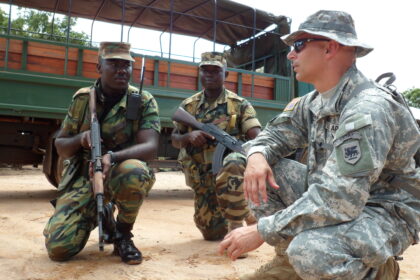 France’s Armed Forces Minister is traveling to Washington in the coming days to discuss US military support to French forces in the Sahel region, the ministry said in a statement.

The announcement comes a month after a report in the New York Times claimed the Pentagon was planning to reduce its military activities in West Africa or even pulling out entirely.

According to the Times report, this is part of a general overhaul in defense spending where the focus would be redirected to other concerns such as China and Russia.

Paris has 4,500 troops in Mali and the wider Sahel and announced on Monday Jan.14 the sending of additional 220 troops to the region to address the worsening security situation. The United States provides intelligence, logistics and drones support for the French forces, but there have been mixed signals from Washington that it could pull out.

“We count on the precious support of the United States for the success of this consolidated effort,” France’s armed forces minister, Florence Parly told lawmakers on Wednesday.

“I will be in the American capital in the coming days to consolidate the existing deployment.”

“If the US decided to withdraw from Africa, it would be bad news for us,” Macron said at a news conference during a summit in Pau, with the presidents of the five African countries that make up the G5-Sahel coalition.

In another development, the United States, on Wednesday Jan.15, asked the UN Security Council for an overhaul, coupled with a reduction, of the UN peace mission in Mali (MINUSMA), a position rejected by France and Russia.

“It is time for this Council to start developing an alternative approach to deal with the growing instability in Mali,” said US deputy ambassador to the UN, Cherith Norman Chalet. “We must recognize that peacekeeping missions are not the answer to the growing terrorist threats in Mali,” she insisted.

Washington has regularly questioned since 2018 the usefulness of the MINUSMA, a force of 15,000 peacekeepers requiring an annual budget of 1.2 billion dollars and present in Mali since 2013.

Cherith Norman Chalet also stressed that MINUSMA must stop supporting the application of a peace agreement signed in 2015 and little respected by its signatories. It should “focus on the protection of civilians” and “the mission can reduce its size,” said the US diplomat.

Cherith Norman Chalet called for “a new approach that breaks the status quo” by June, the expiry date of the MINUSMA mandate. She also called for the UN to adopt sanctions “against individuals and entities from all parties to the conflict, including government officials and members of armed groups” who violate the peace agreement.

At the Security Council meeting Wednesday, both Russia and France expressed their deep disagreement with the American proposal to redefine the prerogatives of the UN peacekeeping mission in Mali.