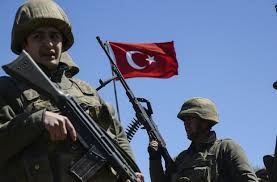 Only hours after the Turkish parliament approved a bill allowing Ankara to send troops to Libya, several voices rose to condemn the move.

The Arab League denounced the approval by the Turkish parliament of the bill and stressed the need to stop foreign interference in Libyan affairs.

“The Arab League underscores the importance of stopping foreign interference in Libyan affairs,” the league said in a statement on December 2.

The pan-Arab organization said it would continue to offer backing to the political process in Libya on the road to a negotiated settlement to its crisis.

The Egyptian Foreign Ministry said in a statement that any such deployment could “negatively affect the stability of the Mediterranean region” and called on the international community to urgently respond to the move.

The bill was also rejected by US President Donald Trump, who warned Turkey against sending troops to fight in Libya, hours after the Turkish Parliament voted to authorize the deployment.

The warning came in a phone call between President Trump and President Recep Tayyip Erdogan.

The two Presidents discussed several “bilateral and regional issues,” according to a readout of the call released by the White House.

“Foreign interference is complicating the situation,” Trump said, according to the White House.

In Libya, a rival administration based in the east of the country, has attempted a coup to oust the Tripoli-based government of Prime Minister Fayez Sarraj, who has been fighting an insurgency by forces under the command of Gen Khalifa Haftar, based in eastern Libya.

Turkish President, Recep Tayyip Erdogan, submitted the bill to vote after the GNA sought the help of Turkey.

The Turkish president, whose ruling AK Party commands a majority in parliament, was able to pass the legislation without support from major opposition parties, which voted against it.

The bill allows for the deployment of non-combat troops, to act as advisers and trainers for GNA forces against Gen Haftar.

Turkey has already supplied armored vehicles to the GNA and also operates drones on its behalf.
Turkish troops will apparently be deployed in a “training and advisory” role. But this is a highly flexible description.