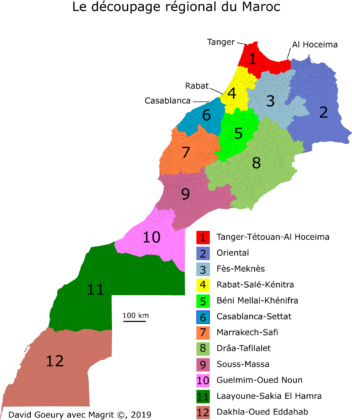 The first national conference on advanced regionalization opened, Friday in Agadir, Southern Morocco, with a message from King Mohammed VI stressing the importance of this structural project in boosting the economic, social and cultural development of the country.

“I believe that administrative devolution is both a pillar and a pre-requisite for the success of advanced regionalization”, said the Monarch in his message read out by Interior minister Abdelouafi Laftit.

The targeted goals “cannot be achieved unless all energies are mobilized and all ministerial departments are actively involved in implementing the charter”, stressed the King, calling on the Government to speed up the preparation of master plans for administrative decentralization, which should be based on actual devolution to regions of function-related and decision-making powers.

Constitutional, political and administrative reforms were made for the implementation of the advanced regionalization, said the Sovereign, affirming that the Moroccan model is built around the active contribution of local governments to integrated development based on democracy, efficiency and participation.

However, the actual implementation of the fundamentals of advanced regionalization in Morocco hinges on the existence of a clear, feasible regional policy in the economic, social, cultural and environmental sectors, underlined the Monarch.

“It should be part of a public policy based on the regional dimension and on an efficient and strong economy that stimulates growth, creates job opportunities and achieves social justice”, said King Mohammed VI.

He also stressed the need to increase the effectiveness of policies, programs and projects at the regional level to make sure they actually benefit target populations on equal footing.

This approach has been applied in Morocco’s Saharan provinces wherein a comprehensive development model has been implemented, taking into account the particularities of these provinces that benefited from major projects meeting the expectations and aspirations of inhabitants, said King Mohammed VI.

“As I have stressed on many occasions, serving the citizens and making sure their legitimate rights are respected is the very raison d’être of all types of public institutions and government agencies”, insisted the King, urging local governments, decentralized administrations and public institutions to mobilize their human, financial and logistical resources to provide fair and efficient public services throughout the Kingdom.

The King expressed hope that this National Conference will be a special opportunity for careful reflection, fruitful research and serious dialogue to make an accurate assessment of the outcome of efforts to implement advanced regionalization.

He also urged the conference to come out with practical recommendations likely to help the country rise to the challenge of achieving regional development, curb social disparities, enhance attractiveness, improve regional competitiveness, open up to modern financial governance mechanisms, and ensure the effectiveness of all forms of participatory democracy, making it a lever for integrated, sustainable economic and social development.

Whatever the progress in implementing advanced regionalization, it will still fall short of expectations so long as it is not accompanied by a set of indispensable measures that make it possible for regions to exercise their powers fully and more effectively, the monarch underlined.